Confusion over invite to prez 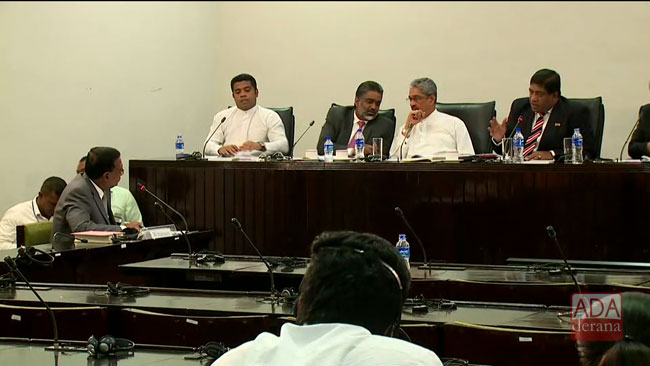 Despite media reports of dates being allocated for President Maithripala Sirisena to testify before the Parliamentary Select Committee (PSC) probing the Easter Sunday attacks, there seems to be confusion about the President’s appearance before the PSC.

PSC member MP Prof. Ashu Marasinghe told The Sunday Morning that the Committee had decided to invite the President to appear before it.

“We agreed to invite the President to appear before the Committee this coming week. However, I’m not sure if the Chairman sent the letter of invitation,” Prof. Marasinghe said.

Chairman of the PSC and Deputy Speaker of Parliament Ananda Kumarasiri however said that he had not sent the letter to the President yet.

“I have not sent the letter inviting the President yet. I want to meet with the Speaker and discuss the matter before I send the invitation,” the Deputy Speaker said.

Meanwhile, PSC member MP Dr. Nalinda Jayatissa said the Deputy Speaker should have sent the letter inviting the President to testify before the PSC by now.

“We came to a unanimous agreement that we would be summoning the President this week to testify before the Committee. The Chairman should have sent it by now. It is wrong if he hasn’t,” he said. In addition, the Committee is expected to summon the members of the Presidential Committee appointed to investigate the Easter bombings on Tuesday (20) at 3 p.m.

Accordingly, the three members of the the Presidential Committee, Supreme Court Justice Vijith Malalgoda, former Inspector General of Police N.K. Illangakoon and former Ministry Secretary Padmasiri Jayamanne, will appear before the PSC together.

January 13, 2020 byTSM Web Desk No Comments
Over 50,000 unemployment graduates will be absorbed to the state sector by 1st of March this year, says Minister of Education and Minister of Sports & Youth Affairs Dullas Alahapperuma said today.