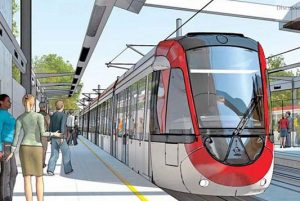 He said the Transport Ministry was looking at the possibility of amending the loan conditions to enable a competitive bidding process instead of permitting only Japanese companies to bid for the project.

“In the existing agreement, there is a Japanese monopoly as the contract would be designed by Japan and only the Japanese companies could enter the bidding process which means the LRT would be constructed by a Japanese company,” Dissanayake said, pointing out that it was one major reason for the high project cost.

However, The Sunday Morning learnt that the loan had been offered on highly concessional terms and conditions including a 40-year repayment period for amounts taken towards consultation services with a grace period of 12 years and 0.1% interest per annum for civil works and equipment with a 0.01% interest rate for engineering services. The loan would be administered by the Japan International Corporation Agency (JICA).

The project covers the construction of a 15.7 km elevated railway track, elevated stations and train depot, the procurement of LRT trains and the installation of electrical, communications, and signal systems.

However, The Sunday Morning learnt that in a meeting held with Transport Minister Mahinda Amaraweera, a team of engineering experts had highlighted that the project could be implemented at a cost of around $ 1,500 million even though at present it was estimated at around $ 2,500 million.

In addition, the team has pointed out to the Minister that the LRT shouldn’t be built in an elevated line but on the ground so that the cost of the project could be further reduced.

Speaking to The Sunday Morning, a transport expert, who wished to remain anonymous, stressed that the project should be completely renegotiated, including the project design and as well as the cost of the project.

However, LRT Deputy Project Director Dissanayake stressed that the current project design was the most suitable to the country to reduce the travel time by avoiding the traffic congestion.

“The lowest cost is a ground line, next is elevated, and the highest is underground. To Sri Lanka, the elevated line is the most suitable,” he noted.

The Sunday Morning learnt a total of $ 192 million had been spent to conduct a project study for the Colombo Fort-Malabe LRT.

Speaking to The Sunday Morning, Minister Amaraweera said that he had instructed experts to submit a project proposal and once the proposal was submitted, the Minister would present it to Cabinet for further approvals and suggestions.

September 24, 2019 byTSM Web Desk No Comments
The Department of Meteorology says that the prevailing showery condition over the Island is expected to continue until tomorrow (25) night.

July 12, 2020 byTSM Web Desk No Comments
The Ministry of Agriculture is yet to act on the recommendations that were presented through a report in 2017, on implementing a mechanism to evaluate the presence of heavy metals and carcinogens in i