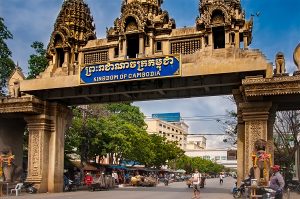 Yours truly has been making her way around Southeast Asia over the last two weeks – primarily Thailand. Everywhere I go, I am forcibly reminded about the inter-connectedness of our people – we’ve clearly been intermixing for a very, very long time. Due to the influence of Buddhism – and much else besides – there has always been a flow of traffic between Sri Lanka and Thailand.

Even so, the brown-skinned here are not particularly welcome, particularly the brown-skinned from Sri Lanka. Don’t get me wrong, I’ve met many lovely Thai people – helpful and kind. I’ve also met the other kind – ones wondering if I’m running as an illegal migrant – so curt and rude, particularly when I went to the Cambodia-Thai border, with a valid visa, and still got turned away. Sri Lankans can’t cross by land apparently. Or so they said when I actually went there; they had not put that rule anywhere in writing.

It’s a legitimate border crossing at Poipet, Cambodia which lets international crossovers via bus, unless you are the wrong kind of passport holder – such as a Sri Lankan apparently; again, not overtly mentioned anywhere. I had to go there to find out and be treated rudely by many people in the process, including the bus driver transporting us across.

This happened just a few days ago, and I am still absorbing the impact. I don’t know if this says anything about the Cambodian community, the Thai community, or indeed my community – the Sri Lankan Tamils. We are well known here as illegal migrants using these countries as a transit point to the West. And so we are treated with hostility and suspicion, even if we have valid visas and valid travel plans that are perfectly above board and legal.

No one puts their lives, reputations, and all their assets in Sri Lanka in jeopardy just for the heck of it – they all had/have valid reasons to migrate, and I don’t begrudge them. Since legal exits to other countries have officially been slammed in their faces, they feel the need to find all the loopholes they can exploit, leading to countries that used to give visa on arrival like Thailand retracting that facility from us, a facility enjoyed by a large portion of the rest of the world. Many countries that generally give visas on arrival do not extend that facility to Sri Lankans. Countries that do give us such visas on arrival, like Singapore, are extremely hostile when we actually arrive.

Due to this hostility exhibited to Sri Lankan passport holders across many countries, I actually prefer being able to get visas beforehand rather than on arrival. I actively tried to get a prior visa to Singapore before landing there, but that facility was not available. So when I arrived, I was treated so shabbily, I feared I was going to be turned back at the border in Malaysia from where I had crossed over. I had all my paperwork in place, but they still held me behind for three hours – by which time my bus left without me. I was the only one left behind and singled out for this special attention, and recall still with humiliation, my interrogating officer flinging my passport in my face in contempt as if it had no value – then again, it probably didn’t.

If left to his own devices, he probably wouldn’t have let me through – he made that clear – but he eventually had to refer to a superior officer, a lady who acted surprised I had been detained at all. And just like that, I was suddenly let through. Phew. Still remember the anxiety I felt, and the relief of finally getting through.

Thus far, whether I had a valid visa or not (when I needed to get one on arrival), I am used to being hassled, having my passport checked repeatedly as if the visa stamps on them are illicit, and asked various hostile questions on what exactly I want to do in the destination country, but I’ve eventually always been let through. Last week marked an end to that string of dubious luck; I suppose it was inevitable. Cambodia, despite having given me a three-month visa, refused to let me through. I had expected to be hassled of course, but I had not expected to be rejected. I am still left reeling, and wondering if this was even legal.

Just because sections of my community are known for illegal trafficking, can Cambodia shut away all members of my community? And if they do, shouldn’t they tell us that instead of giving the visa and then rejecting us at the border?

I never even made it to the Cambodian border. I was retained on the Thai side as they negotiated furiously with the Cambodian side on whether to let me through. The answer was a no holds barred “no”.

I repeatedly asked why, but was not given a valid reason. When the bus pulled up at the Thai exit point, the bus driver pulled me aside to tell me that I was not going to make it through and so he’d likely leave without me (fortunately, they did make arrangements for me to return to Bangkok).

When I asked why then too, I was brusquely told: “How do I know why? It’s not my business to tell you why. Sri Lankans are not let through at this border, that’s all.”

Inside, the Thai officials were not as rude, but they did say they had no control in letting me through as Cambodia was refusing my entry – and they again didn’t know why. At one point (apparently conveying queries from the Cambodian side), they asked if I had $ 1,000 on me.

No, I was going for three days into Cambodia just to tour the famed Angkor Wat temple complex – a long-held dream. I had already paid for my hotel and had $ 220 in cash, along with $ 500 at the bank which I could withdraw via an ATM. I am a budget traveller and figured this was enough for my three-day stay in Cambodia. That notion was treated with a lot of eye rolling.

I was told that I did not have enough money to get through.

Yet, I noticed my bus co-travellers – all of them white – were being let through without any trouble or demands for proof of funds. Unlike me, they didn’t even have a Cambodian visa; that would be issued to them on arrival on the other side – one more thing denied to me as a Sri Lankan, and so I had had to shell out $ 30 to procure one. Not that it did me much good.

I was then arbitrarily told: “You can fly in if you want to, but can’t come in by land.”

Why? Is there some contamination if I come in by land?

I am not sure how I feel about Cambodia anymore. I always used to feel an affinity with it, due to its civil war and what happened to its people. For that matter, Cambodians too were once known as rampant illegal migrants – such is what war reduces us all to. Rather strange to be treated as an illegal migrant by them, unwelcome in their country.

As someone who grew up in another country (as a legal migrant, yet nevertheless treated oftentimes badly as an unwanted one) I have never had the fascination of my compatriots to settle down abroad. If being a legal tourist can be this much of a hassle, who wants to be an actual migrant? No thanks.

Due to the nature of my work though (one of the perks of journalism), I have been able to visit various countries my community hanker to migrate to still – the US, UK, Canada, and the like.

I always returned well before my visas expired, once my scheduled work was over. I have never hankered to stay over. What is always irritating though, is to have to come back to Jaffna, my hometown where I live voluntarily, to people who will inevitably snigger and ask if I got caught illegally migrating and got turned back.

I come from a milieu where people only travel in such a manner for the purpose of migration – and so if I went to one of the western countries and returned, it must mean I was forcibly returned.

Why that should invite sniggers, I have never understood. I have met many returned migrants and been horrified by the stories they’ve related – but one of the worst things they were subjected to was that they are too ashamed to come back and face their community’s sniggers – and so live in exile elsewhere in Sri Lanka to escape ignominy. People can be cruel, on any side of the border, including our own. I don’t begrudge the Thais or the Cambodians, therefore. We live in a world where prejudice is the norm.

When I get back to Jaffna soon, at least I will be returning to legitimate sneers now. All this time it was not true, but it will be this time. “Why are you back here? Were you turned back at the border?”

I am human and I will not allow dehumanising experiences to define me.

(The writer is a freelance journalist based in Jaffna. All views expressed are her own and not of any organisations affiliated to her)

January 27, 2019 bythemorninglk No Comments
Last week's wedding of former President Mahinda Rajapaksa's youngest son in Tangalle saw an interesting mix of invitees who were both conspicuous by their presence as well as their absence.