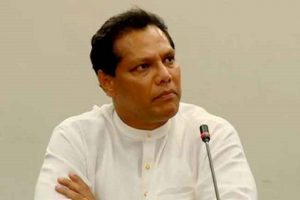 Sri Lanka Freedom Party (SLFP) General Secretary MP Dayasiri Jayasekara said that the masses should not expect democracy and human rights to be safeguarded if they elect Gotabaya Rajapaksa.

Jayasekara said that a strongman character such as Gotabaya Rajapaksa would not care for democracy or human rights and would suppress any dissenters. He added that neither the UNP nor the Sri Lanka Podujana Peramuna (SLPP) could win the election without the backing of the SLFP.

How does the SLFP view former Defence Secretary Gotabaya Rajapaksa’s candidacy at the presidential polls?

It was not a development that came about on its own. After Mahinda Rajapaksa, the SLPP did not have a leader that could take nationalism forward. So there were multiple reasons for him being their candidate. The first factor was that it had to be a leader from the Rajapaksa family.

Second was that national security became the foremost need of the country following recent events. The third factor was that due to the instability and infighting of the current Government, a common perception was formed that a strongman-type leader was needed to rule the country. That is why the SLPP was compelled to put forth someone like Gotabaya Rajapaksa as its presidential candidate.

Various allegations have been levelled against Gotabaya Rajapaksa ranging from corruption to the use of strongman tactics. Do you believe he can uphold democracy and human rights in Sri Lanka?

We cannot expect a leader with strongman-type attributes to safeguard and develop democracy. It has also become apparent that the people of the country do not want democracy. Even the educated do not want democracy. Everybody wants an authoritarian ruler as our president who won’t bend or waver. So when such an individual becomes the leader, they only care about their decisions and not about democracy and whoever stands against his decisions will be suppressed. So there is no point in expecting democracy in the future. If people want to elect someone like Gotabaya Rajapaksa then they must accept the consequences that come along with a Gotabaya presidency such as there being no democracy or human rights.

Will the SLFP join forces with the SLPP?

We cannot join with the UNP and form a government. We are a centre-left progressive political party. We have neoliberal capitalism in the Ranil Wickremesinghe camp while on the other end, we have the extreme nationalistic policies of the Rajapaksas.

The SLFP must walk the middle ground. That is our challenge. To this end, we may have to side with the SLPP as we cannot work with the UNP. This is the reality we must face. So the problem we are facing now is how we could work alongside such a group. The journey forward for the SLFP will be challenging.

Has the SLFP completely forsaken any notion of forming an alliance with the UNP?

We cannot work with the UNP nor can we work with the SLPP. We have to work around this somehow. For one, there is no national or urgent need for the SLFP to align with the UNP. We did that in 2015 and the SLFP had to pay the price.

Can the SLFP muster support to contest an election alone?

Yes, we can contest alone but I don’t think we can contest a presidential election and be successful. But we are of the view that neither the UNP nor the SLPP can either, without our support. That is why we will support the party that has the best interest of the country and its people in mind. So deciding to contest alone will hinder the chances of the other two parties.

Earlier you said that the country should not expect democracy and human rights under a Gotabaya Rajapaksa presidency. So why then is the SLFP looking to support such an individual?

The SLPP announced their nomination before the SLFP joined forces with them. So then, we are left with the options of supporting or rejecting their candidate. With the current situation in the country, we are left with only this option. We have a responsibility to see how we can safeguard democracy while working with a strongman like Gotabaya Rajapaksa. The SLFP must fight for the social values of the country as well as for democracy and human rights.

Would President Maithripala Sirisena contest at the presidential election once again?

For now, it doesn’t seem so. The President has not taken a decision on that matter yet. However, it is the view of the SLFP that President Sirisena should contest this presidential election. We believe that a lot of the country’s problems will be resolved if the President and Mahinda Rajapaksa worked together in governing the country.

If he contests the presidential election, would he not go against the mandate received in 2015 to abolish the executive presidency?

Does the SLFP believe the President could win if he contests again?

The formation of the SLPP has eroded the SLFP vote base to a great extent. How will the SLFP face this situation at the elections?

This is only a temporary setback. The SLFP and its supporters have always been against the UNP. The main reason for this setback is the opposition towards the UNP-SLFP Government.

So where the SLFP is now did not come about naturally. We were forced here. Only in such a backdrop was the SLPP formed, which resulted in them gaining the support of those who were anti-UNP. But the SLPP is not united as they would like us to believe. There are many internal disputes among the party leaders and nepotism within the party is also having a negative impact. All these problems of the SLPP can be used to rebuild the SLFP stronger than before.

How do you think the SLFP could be resurrected as a strong political force again?

President Sirisena is working to take the party forward. We also have a second-tier leadership to take over the reins of the party when the time is right.

Alliance will field SLPP candidate; no decision on whom: Namal Rajapaksa

We thought terrorism was over after the war: Lakshman Kiriella

May 3, 2019 bythemorninglk No Comments
These guys have gone to the Middle East and all the photographs are on the internet. Though ISIS was defeated in the Middle East, their hardcore carder survived and now their concentrating on other co