Demand is for someone who can deliver 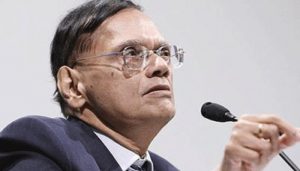 Chairman of the Sri Lanka Podujana Peramuna (SLPP) Prof. G.L. Peiris said that while they were open to an alliance with the Sri Lanka Freedom Party (SLFP), the SLPP did not believe that the SLFP grassroots supporters would vote for a United National Party (UNP) candidate even if the SLFP decided to join with the UNP.

Do you think former Defence Secretary Gotabaya Rajapaksa would be successful at the presidential election?

Yes. From all the meetings we have had so far in Anuradhapura and Kandy where we met with religious leaders, we were told the top priority in the country today is national security. This is a very a strong feeling that is permeated down to the grassroots level in the villages and the towns of Sri Lanka.

This is one of the reasons why a leader of the calibre of Gotabaya Rajapaksa is wanted by the people; someone who ensures security. People can rely on him to provide the protection that is needed by all in contrast to the present Government, which had all the information to prevent the Easter attack but did nothing.

The second factor is discipline. Right across the social spectrum – whether you talk to village people or professionals – there is a very strong sentiment that discipline is required in the country.

The third element is credibility. Somebody who has delivered and shown results is needed, as opposed to someone who only makes promises. That is why people regard Gotabaya as the ideal leader and one who will achieve a historic victory.

Is he the candidate of the SLPP or the SLPP-led alliance?

He is the candidate of the SLPP with the strong support of those in the alliance.

Gotabaya Rajapaksa is not a career politician. Why was he selected over other much senior politicians within the “Joint Opposition” (JO) ranks?

The demand right now is not for a senior politician but for someone who can deliver the goods.

There are many allegations against Gotabaya Rajapaksa ranging from corruption to strongman tactics. How important is democracy and human rights for Rajapaksa and his supporters?

Those are mere allegations. The previous Government was accused of corruption and special tribunals and courts were set up. The very first case before the special court was that of Gamini Senerath. Senerath was acquitted of all charges. This is just mudslinging. I don’t think the public are going to be influenced by any of it.

So the current litigation against Rajapaksa would not have an impact on his election bid?

Going back to my earlier question, is Rajapaksa willing to uphold and strengthen democracy?

Of course he will. In our term, we held elections not just on schedule but even before they were due to be held. After 20 years, we held provincial council (PC) elections in the Northern Province. Above all, we respected the people’s right to franchise. It is the present Government that has denied the people suffrage by not holding PC elections. Eight out of nine provincial councils are defunct. They postponed local government elections for two-and-a-half years. That is a strange way of respecting democracy. We never did that.

Is there democracy within the SLPP and its alliance?

Of course there is. Every Tuesday, the SLPP and “JO” leaders meet under Mahinda Rajapaksa’s leadership and all issues are discussed; all points of view are expressed freely and decisions are made through consensus. That is the democratic culture in practice.

Why then did former President Mahinda Rajapaksa have sole discretion to choose the presidential candidate? Should it not have come through a common consensus?

What of the alliance with the SLFP?

There were five meetings held with the SLFP and we were able to agree on substantive policies. With regard to the institutional mechanism for working together, it was thought that the best approach would be a direct discussion between the two leaders. There was one such meeting and it is likely that there will be another meeting in the near future. So the doors are open and we have extended an invitation to the SLFP to join with us to give added strength to the anti-UNP campaign.

So how important is the SLFP to your alliance and are you willing to let them walk away and join with the UNP?

We do not for a moment believe that the SLFP supporters at the grassroots level will vote for the UNP. That is wishful thinking; it is totally unrealistic and it is not going to happen.

How does the SLPP hope to court the Tamil vote when a majority of Tamil voters have pledged support to the UNP in the past?

That is all changing very rapidly. What has the present Government done for the Tamil community? The Tamil National Alliance (TNA) has been agitating for greater devolution of power. But the present Government has taken away all the powers that were given. Now, there is no provincial council in the North at all. There has not been a provincial council in the Eastern Province for more than one-and-a-half years. Now, the problem is not greater devolution or lesser devolution – there is zero devolution.

The fact of the matter is that the development in the North under the Rajapaksa Government was tremendous in terms of infrastructure, irrigations, schools, and hospitals – but nothing whatsoever has happened in the North since 2015. Therefore, we are confident that there will be considerable support for Gotabaya Rajapaksa among the minority communities.

How does the SLPP hope to get the support of the Muslim voters?

Muslims are also very concerned about their physical security right now with the emergence of extremist groups and a perceived alienation from the rest of the community. They want to live together in peace and harmony. All of this requires not an ethical situation but a Government that is able to rule the country with credibility. So the Muslim community has every reason to be totally dissatisfied with the present state of affairs and to opt for something fundamentally different.

What have you to say regarding the allegation levelled against Gotabaya Rajapaksa and methods used to revoke his US citizenship and obtain sole Lankan citizenship?

Differences aside, we must be ready for elections: Harin Fernando

February 10, 2020 bythemorninglk No Comments
The United National Party (UNP) has more or less resolved its inter-party issues and is now looking to work together to face the upcoming parliamentary elections, UNP MP Harin Fernando said

July 29, 2019 bythemorninglk No Comments
State Minister of Foreign Affairs Vasantha Senanayake asserted that stricter laws and penalties must be introduced to have better success with tackling the drug menace.