What is the patriarchy? 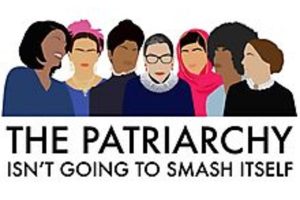 The F Word by Sharanya Sekaram

Last week, I was browsing through a copy of The Journal of Gender and Sustainable Development published by the Centre for Gender Studies, University of Kelaniya. To my dismay, I came across an article titled “An Overview of Feminism in Philosophy”. The piece in my opinion is poorly written and is also rife with misconceptions when describing the tenants and theories that drive the feminist movement.

I will write further about this to the university, whose work in the past I have greatly admired, and in further columns. But this week, I wanted to focus on a particular phrase the author seems to have significantly misunderstood. This takes place through the use of a deeply problematic graphic which depicts the three waves of the feminist movement. It shows the third wave feminist as an angry, pierced, Mohawk-wearing graphic and, among other things, describes them as blaming the patriarchy for all society’s ills. While the author doesn’t elaborate on this graphic in the paper itself, at the very least, it is concerning that an academic paper has used such graphics without any accompanying critical analysis as a means to explain and/or describe what fairly complex concepts are.

Yes, many feminists (who may or may not identify as belonging to the third wave movement) refer to the patriarchy or the patriarchal system of power when explaining or rationalising the need for a change in the system or as a system that oppresses not just women but those who do not fit into the patriarchal ideal. In this week’s column, I am going to attempt to break down what the patriarchy is, so to speak, and why the dismantling of this system and hierarchy is seen as vital by feminists and the issues they speak and work for.

The etymology of the word “patriarchy” in its most literal sense means “the rule of the father” and comes from the Greek word patriarkhēs, which means father or chief of the race. Historically, the term has been used to refer to the autocratic rule by the male head of a family. However, through the influence of feminist writings, this usage has changed since the late 1900s.

Today, when we use the term, we refer to social systems in which power is primarily held by adult men. It usually draws its power from societies being patrilineal, meaning that property and title are inherited by the male lineage. This means that males are able to control wealth, and thus by natural extension make decisions, formulate how the society is structured, represent interests in the public sphere, etc. This has taken place over many decades and thus continues to manifest and exist even when patrilineage is no longer a common practice, as the underlying foundations and institutions continue to function as they have been set up.

The matriarchy is the opposite – i.e. a social system in which females hold the primary power positions in roles of political leadership, moral authority, social privilege, and control of property. While there are some examples of matriarchal societies particularly in ancient civilisations, most modern civilisations today are largely patriarchal.

This is a concept and doesn’t always manifest in a literal sense, and we see its manifestations in the social, legal, political, religious, and economic organisation of a range of different cultures. An example of the manifestation of the patriarchy can be found in the Sri Lankan legal system which has various discriminatory laws including; when a man forcibly has sex with (i.e. rapes) a woman he is married to, the law does not recognise this as rape.

This stems from the notion that marriage is a social contract where the wife submits to and serves her husband in return for economic support, physical protection, etc. It draws from rigid gender roles, responsibilities, and behaviours which are driven by patriarchal ideals.

Sociologists have, in their work, seen patriarchy as a social product and not as an outcome of innate differences between the sexes, and they focus attention on the way gender roles in a society affect power differentials between men and women.

At the core of understanding how the patriarchy functions and manifests is understanding how power is held, and how those who lack power find their interests, needs, and voices unrepresented and often actively oppressed.

There is extensive writing by many feminists including Gerda Lerner, Alison Jaggar, and Heidi Hartman on various aspects of patriarchy – from looking at the control of women’s reproductive and sexual health to how capitalism and the patriarchy intertwine in systems of oppression. This is a school of thought that has extended for many years and continues to grow and evolve, as does our understanding of it in various contexts.

A key example of a feminist movement that fought against women’s oppression in patriarchal systems is the suffragette movement which led the call for women’s right to vote. As gender roles dictated, women were seen unfit for public life and decision-making and thus were actively kept out from expressing their voices in democratic systems as men did through voting. This is an example of how societies built on patriarchal values oppress through refusal to access rights that can lead to the oppressed leading change.

How many feminists today understand the patriarchy as an example of a system of unequal power that oppresses those not at the centre of the system, among others such as race, caste, and class. We look at how structures and institutions are developed in the intersection of these systems of oppression and how that can affect people differently based on their identities, jobs, experiences, and lived realities.

As black women, they found oppression not only at the hands of white men, but also black men and white women. Lorde went on in her work to identify issues of race, class, age and ageism, sex and sexuality, and later in her life, chronic illness and disability as fundamental to her experience as a woman.

For example, I face disadvantages on a global scale being a women of colour, living and working in the global south. However, I must also acknowledge my privileges as an upper-caste, upper-middle-class person who has access to education and is fluent in English. When placed against a lower-caste, middle-class Sri Lankan man, in some respects, this means I have more power than he does, but not always. His privilege as a man in turn means that in other respects, he has more power than me (such as to walk around at night alone).

If it seems complex – that is because it is. What happens often is, to fit simple narratives or to win coffee chat arguments we oversimplify what are complex concepts, perhaps because we have been taught that anything complicated should not be so. This is the opposite of what the human experience and our societies are – they are beautifully, fascinatingly, and deeply complicated. In order to change any status quo, we must understand and embrace that. We must peel back the layers and open our minds to the web that exists and understand it is about so much more than our individual experiences and specific manifestations.

As Audre Lorde said: “I am not free while any woman is unfree, even when her shackles are very different from my own.”

January 19, 2020 bythemorninglk No Comments
The decision on the leadership of the UNP was once again delayed, as last week’s meeting ended inconclusively and SP's camp adamant to form its own alliance from within the party to face the polls.

November 4, 2018 bythemorninglk No Comments
Our lives begin to end the day we become silent about things that matter” – Martin Luther King Jr.
Lies, damn lies, deception, disloyalty, and corruption are the new “virtues” that a whole new genera