A journey from darkness to light

February 26, 2020 by themorninglk No Comments 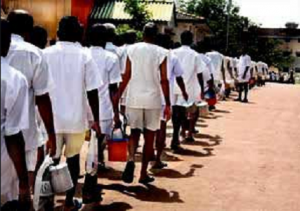 By Skandha Gunasekara
A novel prisoner rehabilitation programme was launched last week under the leadership of the Ministry of Justice, Human Rights, and Legal Reforms and the Department of Prisons in collaboration with the Avant Garde Group in an endeavour that is expected generate $ 400 million in foreign exchange to the country.
The event was officially launched at the Welikada Magazine Prison last Tuesday (18) where the full extent of the programme and its aims were revealed. The programme will see the Government train prison inmates while they serve their sentences.
Vocational and skills technical training will be given to those serving short sentences of two to five years.
One of the key aims of this initiative is to boost the chances of inmates to better integrate with and contribute to society once they are released after serving time. This will include them being more eligible for job opportunities, particularly foreign employment.
The project would see the Government provide trained and qualified prisoners certificates corresponding to the National Vocational Qualification (NVQ) level.
Approximately 500 inmates are to be trained in the first phase of the programme, in which specialised subjects such as language proficiency courses in English, Arabic, Chinese, and French will be included to equip them for better jobs in the foreign market. The entire programme is expected to result in the rehabilitation of 5,000 inmates in one year.
The Avant Garde Group and its Chairman Maj. (Retd.) Nissanka Senadhipathi will provide the teachers, trainers, as well as meals for the programme. The project would function as a public-private partnership (PPP) between the Government and the Avant Garde Group.
The development of infrastructure facilities within the prison, funded with the assistance of the private sector, will take place simultaneously.
Bringing value to prisoners
This unique initiative was formulated by Senadhipathi as a result of his own brief incarceration.
Commissioner General of Prisons T.M.J.W. Thennakoon, addressing the launch event of the programme, noted that 80% of inmates are unemployed at the time of imprisonment and that the remaining are engaged in industrial vocations.
He then pointed out the high tendency of these prisoners to reoffend once they are released, mainly due to social stigma and the lack of employment leading them to resume criminal activities such as the illegal drug trade. “This is a programme that should have been started a long time ago,” Thennakoon added.
Thennakoon also made note of the fact that the inmate capacity of prisons throughout the island had long exceeded its maximum capacity.
“The ratio now is one to three; there are 26,000 prisoners where there should be 8,900. Most of these inmates have been imprisoned for minor offences and as such, serve short sentences. Our Department alone cannot handle such volumes for rehabilitation,” he said.
He then said Senadhipathi had requested 5,000 inmates to be trained as an initial step but had been unable to facilitate such a large number in a short period of time.
“So we have, for the first stage, selected 500 inmates to enter the programme,” The Commissioner General of Prisons said, adding that there are also many prisoners who have special skills such as aeronautical engineering, business acumen, and even expertise in weapons manufacturing.
Commissioner of Prisons – Rehabilitation Chandana Ekanayake also stressed the importance of ensuring that inmates do not return to a life of crime after they are released from prison.
“There is legislation to ensure prisoners are given employment after they’re released from prison. We must train them and produce good citizens who can give something back to society,” Ekanayake said, also thanking Senadhipathi for initiating such a programme.
Senadhipathi, addressing the occasion, said that his time behind bars had opened his eyes to the plight of prisoners, especially life after prison, and the untapped potential many of them had.
He said he had studied various laws and legislations including the UN Standard Minimum Rules for the Treatment of Prisoners (Nelson Mandela Rules).
Elaborating further on his endeavour, Senadhipathi said it would cost an estimated Rs. 300-400 million to run the programme for two years.
A much-needed project
Another aim of the project is to bring in additional foreign exchange. Senadhipathi said he had met with a large number of foreign ambassadors and had a network of entrepreneurs and business tycoons – whom he had associated with during his time running the Avant Garde maritime services company – who would assist with providing employment abroad.
“One foreign mission has already reached out to me and requested 5,000 trainees,” he said. Senadhipathi said that the venture would bring around $ 350-400 million annually.
Minister of Justice, Human Rights, and Legal Reforms Nimal Siripala de Silva said he had reached out to several acquaintances in the business community to lend their assistance with the infrastructure development. Accordingly, two lecture halls, 40 toilets, and 30 baths have been set up thus far with the help of the private sector.
“There has been no budget passed by Parliament for the year 2020. If we had tried to carry out the infrastructure development for this project through the Government, it would have taken far too long. By the time tenders are called and the feasibility studies and other matters are tended to, a year would have gone by. With the help of the private sector, we were able to accomplish much of it within just a matter of days,” the Minister said.
He further said the Government would present whatever amendments to legislations needed to ensure its success.
Minister of Small and Medium Business and Enterprise Development, Industries, and Supply Chain Management Wimal Weerawansa and United People’s Freedom Alliance (UPFA) MP Namal Rajapaksa were also present at the launch and addressed the gathering.
Both Weerawansa and Rajapaksa, recounting their experiences behind bars during the tenure of the previous Government, hailed the programme, claiming it was a much-needed project that had taken too long to become a reality.

March 15, 2020 bySarah Hannan 1 Comment
Humans ingest microplastics when they consume foods such as shrimp, prawns, crabs,.. and on average, people would consume about 5 g of plastic per week through various food sources and drinking water.

Schools in the heart of Colombo – Lacking basic facilities

February 16, 2020 bySarah Hannan No Comments
Many expect schools in Colombo to have all the required facilities, but there seem to be few schools that are situated in noncongenial environments.