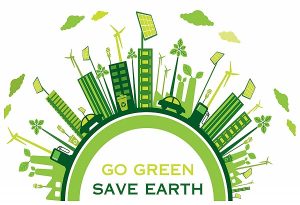 An earnest call is being made to ensure the campaigns for the upcoming election are environmentally friendly.

“We do not have a particular law yet; but this practice should be ethically adopted,” he said.

Recalling election campaigns that were conducted in the 1970s, Deshapriya stated that the parties should repeat what was practised back then. “They used cloth flags in their promotional campaigns instead of flexes, which to my understanding is made up of plastic. So we should abandon these ideas and adopt new ones,” he said.

In March 2019, the Indian Election Commission asked all political parties to desist from using plastic or other hazardous material that may pose a threat to the environment – in the form of banners, hoardings, cut-outs, and other politics-related articles – during the general elections as part of the country’s initiative to eliminate all single-use plastics by 2020.

Janatha Vimukthi Peramuna (JVP) Parliamentarian Dr. Nalinda Jayatissa commended MP Rajapaksa for pointing out the need for a greener environment and also stated that all parties should lead by example.

“The JVP will look for ways to carry out our election campaigns in an environmentally friendly manner. We further stand against the use of polythene, plastic, flexes, and noise pollution, so we are taking measures to minimise damage and work as best we can to make sure no harm is caused to the environment,” he said.

He further stated that a law or a principle should be implemented in this regard. “We must take into consideration the taxpayers’ money. We can combat this issue if the parties and the candidates disclose the expenses that are associated with their particular election campaigns. If they put forward their costs, we would be able to see whether the candidate and their party have promoted environmentally friendly methods of campaigning,” said Dr. Jayatissa.

According to Deutsche Welle, 48% of German voters stated that environment and climate protection would be a decisive factor when casting their ballots during their general elections this year.

Speaking on the matter, “Joint Opposition” (JO) Parliamentarian Vasudeva Nanayakkara said that a consensus was reached between “JO” members.

Nanayakkara also proposed that more incentives and focus be given to innovations in environmentally friendly methods of campaigning.

“We are mainly against sound pollution. We have not had a discussion on this matter yet, but we hope to address this issue,” said the Parliamentarian.

The concept of “green politics”, otherwise known as “eco politics” is a political ideology that stimulates an ecologically sustainable society which is steeped in environmentalism, nonviolence, social justice, and grassroots democracy. The concept was first introduced in Tasmania, Australia in 1972 where the world’s first “green party” was established.

With the young generations focused on environment conservation, Sri Lanka Freedom Party (SLFP) Parliamentarian Dayasiri Jayasekara stated that political parties should not merely adopt this initiative for more votes. “As a generation, we must understand that during the last two decades, we were unaware of what we were doing to our country and our world and thus unknowingly destroyed it. This initiative is not only important when conducting political campaigns, but is vital in setting an example to preserve a better world for the children of tomorrow,” he said.

He further mentioned that it is important to educate and understand concepts such as global warming and climate change.

MP Jayasekara also informed that President Maithripala Sirisena called all parties to carry out political campaigns that are pro-environment. “We the SLFP have already adopted this new concept and we are using alternate strategies such as digital marketing, paper pamphlets, etc.”

This method of campaigning has initiated a global trend, with politicians all over the world adopting new and improved methods of campaigning while saving the environment.

Speaking on behalf of the United National Party (UNP), Minister of Transport and Civil Aviation Ashok Abeysinghe said that a decision had not been made with regard to this topic within the UNP.

“However, it should be noted that we encourage this method of campaigning. We would like to see a plastic-free, polythene-free election where we don’t have huge cut-out posters and such. We must take into consideration the methods of the western world. I was personally thinking of appealing to the Chairman of the Election Commission on this matter and asking him to make this concept a rule of law,” Abeysinghe stated.

April 26, 2019 bythemorninglk No Comments
The Ministry of Health is reported to have recruited 3,700 individuals to fill in job vacancies as a result of recently-created job titles in a job-offering frenzy.

July 23, 2019 bythemorninglk No Comments
Minister of Power and Renewable Energy Ravi Karunanayake decided to purchase yet another 500 megawatts (MW) of barge-mounted emergency power to meet the expected demand for electricity in 2020 while t