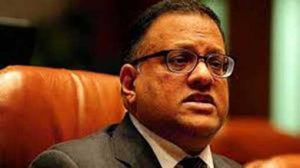 Interpol has issued red notices to a total of 118 Sri Lankan fugitives including former Central Bank Governor Arjuna Mahendran. Yet, in some cases, even though their whereabouts are known, the fugitives have not been arrested.

Among them is Sri Lanka’s former Ambassador to Russia Udayanga Weeratunga, who is wanted in Sri Lanka over allegations linked to the MiG aircraft deal.

There is video footage of Weeratunga allegedly attending an event hosted in Dubai in support of former Defence Secretary Gotabaya Rajapaksa.

Weeratunga had also posted photographs of himself moving around freely in Dubai.

The Interpol website only displays the names of 12 Sri Lankans wanted in Sri Lanka. The reason for this, according to Director – Interpol SP Ranjith Wedasinghe, is that the website has not been updated since 2016.

One would usually assume that when a red notice is issued by Interpol on a suspect, that person would be arrested by Interpol and handed over to the respective country. However, the actual ground reality is far from that.

According to Interpol, a red notice is a request to law enforcement worldwide to locate and provisionally arrest a person pending extradition, surrender, or similar legal action. It contains two main types of information – information necessary to identify the wanted person, such as their name, date of birth, nationality, hair and eye colour, photographs, fingerprints if available; and information related to the crime they are wanted for, which can typically be murder, rape, child abuse, or armed robbery.

Furthermore, these red notices are published by Interpol at the request of a member country and must comply with Interpol’s Constitution and rules.

A red notice is not an international arrest warrant.

According to Interpol, a red notice is an international wanted persons notice. It is not an arrest warrant, and currently, there are approximately 58,000 valid red notices of which some 7,000 are public; a majority of red notices are restricted to law enforcement use only. In cases where the public’s help is needed to locate an individual or they pose a threat to public safety, a public extract of the red notice is published on the Interpol website.

Speaking to The Sunday Morning, former Bar Association of Sri Lanka (BASL) President U.R. de Silva PC said in order to send a suspect on an Interpol red notice who is evading arrest back to their respective country, there should be an extradition agreement between the two countries.

“We don’t have extradition proceedings with those two countries. Therefore, even though Interpol has issued a red notice, they are not in a position to send them back to Sri Lanka. Red notices are issued to arrest, investigate, and extradite. If we have signed a treaty with the concerned country, that country can take action,” he added.

“If the suspect satisfies the court and the court is of the view that it is not possible for them to give an order because the respective country may inflict harm upon the suspect when he/she is sent back, the court will not allow the extradition proceedings.”

A leading criminal lawyer, de Silva said to issue a red notice, the person should have committed an offence which entails over two years of rigorous imprisonment, and the court should satisfy that he/she is purposely evading arrest.

“You have to satisfy the court that he/she is a wanted person. Then the court will give a red notice which will be conveyed to Interpol headquarters,” he added.

Further, as explained by Interpol, red notices are issued for fugitives wanted either for prosecution or to serve a sentence. This follows judicial proceedings in the country issuing the request. This is not always the home country of the individual, but the country where the crime was committed.

When persons are sought for prosecution, they have not yet been convicted and should be considered innocent until proven guilty. Persons sought to serve a sentence have been found guilty by a court in the issuing country.

However, individuals on notices are wanted by a country or an international tribunal and not by Interpol. Also, Interpol cannot compel law enforcement authorities in any country to arrest someone who is a subject of a red notice. Each member country decides what legal value it gives to a red notice and the authority to make arrests remains with their law enforcement officers.

The red notices are used to simultaneously alert police in all member countries about internationally wanted fugitives. Police in other countries can then be on the lookout for them and use the red notice to support extradition proceedings, according to Interpol.

However, when The Sunday Morning asked former Law and Order Minister Ranjith Madduma Bandara what actions they had taken to bring down wanted suspects including Weeratunga and Mahendran, he said, during his term in office, he managed to obtain the red notices, and at present, it was up to the Law and Order Ministry to decide how they should be brought back.

July 1, 2019 bythemorninglk No Comments
President Maithripala Sirisena’s statement declaring that he has already authorised the hanging of four inmates on death row and that the sentences will be carried out soon created much controversy

November 15, 2020 bySarah Hannan No Comments
The Department of Prisons is once again challenged by the spread of Covid-19 in a few of its prisons, with the amount of infected persons this time hitting record numbers.