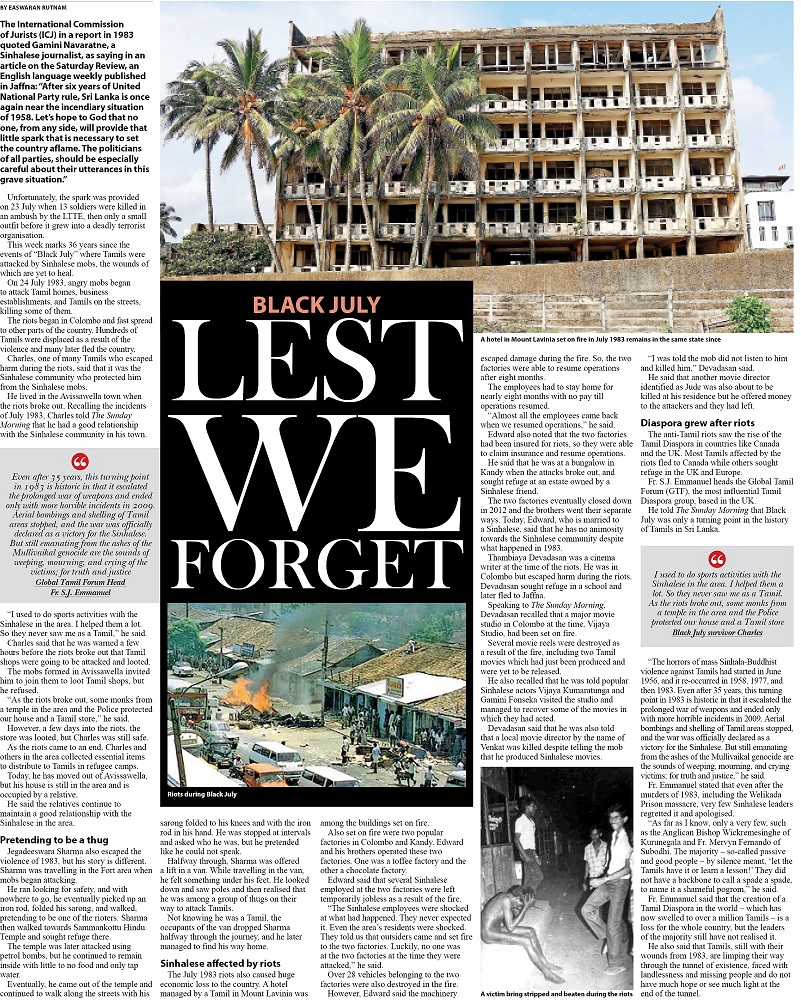 Black July: Lest we forget 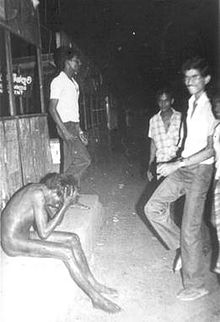 The International Commission of Jurists (ICJ) in a report in 1983 quoted Gamini Navaratne, a Sinhalese journalist, as saying in an article on the Saturday Review, an English language weekly published in Jaffna: “After six years of United National Party rule, Sri Lanka is once again near the incendiary situation of 1958. Let’s hope to God that no one, from any side, will provide that little spark that is necessary to set the country aflame. The politicians of all parties, should be especially careful about their utterances in this grave situation.”

Unfortunately, the spark was provided on 23 July when 13 soldiers were killed in an ambush by the LTTE, then only a small outfit before it grew into a deadly terrorist organisation.

This week marks 36 years since the events of “Black July” where Tamils were attacked by Sinhalese mobs, the wounds of which are yet to heal.

On 24 July 1983, angry mobs began to attack Tamil homes, business establishments, and Tamils on the streets, killing some of them.

The riots began in Colombo and fast spread to other parts of the country. Hundreds of Tamils were displaced as a result of the violence and many later fled the country.

Charles, one of many Tamils who escaped harm during the riots, said that it was the Sinhalese community who protected him from the Sinhalese mobs.

He lived in the Avissawella town when the riots broke out. Recalling the incidents of July 1983, Charles told The Sunday Morning that he had a good relationship with the Sinhalese community in his town.

“I used to do sports activities with the Sinhalese in the area. I helped them a lot. So they never saw me as a Tamil,” he said.

Charles said that he was warned a few hours before the riots broke out that Tamil shops were going to be attacked and looted.

The mobs formed in Avissawella invited him to join them to loot Tamil shops, but he refused.

“As the riots broke out, some monks from a temple in the area and the Police protected our house and a Tamil store,” he said.

However, a few days into the riots, the store was looted, but Charles was still safe.

As the riots came to an end, Charles and others in the area collected essential items to distribute to Tamils in refugee camps.

Today, he has moved out of Avissawella, but his house is still in the area and is occupied by a relative.

He said the relatives continue to maintain a good relationship with the Sinhalese in the area.

Pretending to be a thug

Jegadeeswara Sharma also escaped the violence of 1983, but his story is different. Sharma was travelling in the Fort area when mobs began attacking. 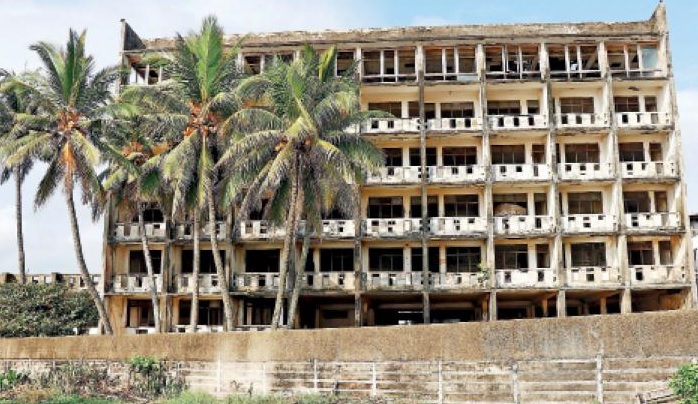 He ran looking for safety, and with nowhere to go, he eventually picked up an iron rod, folded his sarong, and walked, pretending to be one of the rioters. Sharma then walked towards Sammankottu Hindu Temple and sought refuge there.

The temple was later attacked using petrol bombs, but he continued to remain inside with little to no food and only tap water.

Eventually, he came out of the temple and continued to walk along the streets with his sarong folded to his knees and with the iron rod in his hand. He was stopped at intervals and asked who he was, but he pretended like he could not speak.

Halfway through, Sharma was offered a lift in a van. While travelling in the van, he felt something under his feet. He looked down and saw poles and then realised that he was among a group of thugs on their way to attack Tamils.

Not knowing he was a Tamil, the occupants of the van dropped Sharma halfway through the journey, and he later managed to find his way home.

The July 1983 riots also caused huge economic loss to the country. A hotel managed by a Tamil in Mount Lavinia was among the buildings set on fire.

Also set on fire were two popular factories in Colombo and Kandy. Edward and his brothers operated these two factories. One was a toffee factory and the other a chocolate factory.

Edward said that several Sinhalese employed at the two factories were left temporarily jobless as a result of the fire.

Over 28 vehicles belonging to the two factories were also destroyed in the fire.

However, Edward said the machinery escaped damage during the fire. So, the two factories were able to resume operations after eight months.

The employees had to stay home for nearly eight months with no pay till operations resumed.

“Almost all the employees came back when we resumed operations,” he said.

Edward also noted that the two factories had been insured for riots, so they were able to claim insurance and resume operations.

He said that he was at a bungalow in Kandy when the attacks broke out, and sought refuge at an estate owned by a Sinhalese friend.

The two factories eventually closed down in 2012 and the brothers went their separate ways. Today, Edward, who is married to a Sinhalese, said that he has no animosity towards the Sinhalese community despite what happened in 1983.

Thambiaya Devadasan was a cinema writer at the time of the riots. He was in Colombo but escaped harm during the riots. Devadasan sought refuge in a school and later fled to Jaffna.

Speaking to The Sunday Morning, Devadasan recalled that a major movie studio in Colombo at the time, Vijaya Studio, had been set on fire. 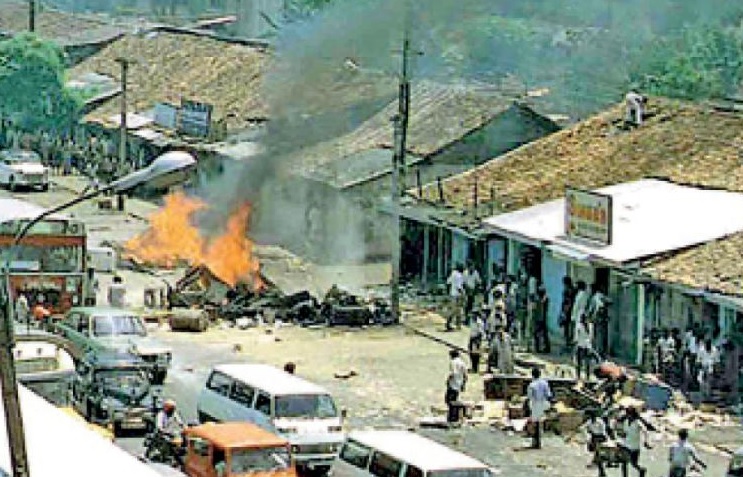 Several movie reels were destroyed as a result of the fire, including two Tamil movies which had just been produced and were yet to be released.

He also recalled that he was told popular Sinhalese actors Vijaya Kumaratunga and Gamini Fonseka visited the studio and managed to recover some of the movies in which they had acted.

Devadasan said that he was also told that a local movie director by the name of Venkat was killed despite telling the mob that he produced Sinhalese movies.

“I was told the mob did not listen to him and killed him,” Devadasan said.

He said that another movie director identified as Jude was also about to be killed at his residence but he offered money to the attackers and they had left.

The anti-Tamil riots saw the rise of the Tamil Diaspora in countries like Canada and the UK. Most Tamils affected by the riots fled to Canada while others sought refuge in the UK and Europe.

Fr. S.J. Emmanuel heads the Global Tamil Forum (GTF), the most influential Tamil Diaspora group, based in the UK.

He told The Sunday Morning that Black July was only a turning point in the history of Tamils in Sri Lanka.

“The horrors of mass Sinhala-Buddhist violence against Tamils had started in June 1956, and it re-occurred in 1958, 1977, and then 1983. Even after 35 years, this turning point in 1983 is historic in that it escalated the prolonged war of weapons and ended only with more horrible incidents in 2009. Aerial bombings and shelling of Tamil areas stopped, and the war was officially declared as a victory for the Sinhalese. But still emanating from the ashes of the Mullivaikal genocide are the sounds of weeping, mourning, and crying victims; for truth and justice,” he said.

Fr. Emmanuel stated that even after the murders of 1983, including the Welikada Prison massacre, very few Sinhalese leaders regretted it and apologised.

“As far as I know, only a very few, such as the Anglican Bishop Wickremesinghe of Kurunegala and Fr. Mervyn Fernando of Subodhi. The majority – so-called passive and good people – by silence meant, ‘let the Tamils have it or learn a lesson!’ They did not have a backbone to call a spade a spade, to name it a shameful pogrom,” he said.

Fr. Emmanuel said that the creation of a Tamil Diaspora in the world – which has now swelled to over a million Tamils – is a loss for the whole country, but the leaders of the majority still have not realised it.

He also said that Tamils, still with their wounds from 1983, are limping their way through the tunnel of existence, faced with landlessness and missing people and do not have much hope or see much light at the end of the tunnel.

January 17, 2021 bySarah Hannan No Comments
The reporting and sightings of the destruction caused by this season's fall armyworm invasion seemed to be quite high, with the menace reaching eight provinces.

January 27, 2020 byEaswaran No Comments
Touts and taxi drivers outside railway stations, bus stations, and even airports have been harassing tourists and local travellers alike for decades, and the situation appeared to be taking a turn for