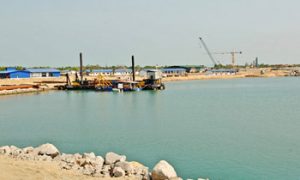 By Skandha Gunasekara
The defunct Oluvil Harbour on the East Coast – which has remained non-operational since the project started in 2013 – continues to incur heavy losses as the Government looks to reutilise it as a mixed development project.
The project was initiated in 2008 during the then Mahinda Rajapaksa Government.
Additional Secretary (Development) to the Ministry of Ports and Shipping Nayana Somaratne told The Sunday Morning that the Government of Denmark had provided a loan of € 45,095,369.49 or Rs. 8,955,194,083.
“The project was started on 1 July 2008 and a total of € 42 million was utilised to complete the project,” the Additional Secretary said.
She went on to say that there were additional costs such as compensation paid for the land acquired for the project where a total of 11 hectares of 276 plots of land were taken over by the Government.
In one such example, the Government had paid Rs. 229 million as compensation for just 32 plots of land in the area.
This cost was in addition to expenses for those currently employed to oversee the limited functions of the harbour.
The Oluvil Harbour was first conceptualised in 1994 during the time of the Chandrika Bandaranaike Kumaratunga Government by late M.H.M. Ashraff who was the Minister of Shipping, Ports, Rehabilitation, and Reconstruction.
Accordingly, a study was carried out on the feasibility and the practicality of the project.
Sri Lanka Ports Authority Director Technical (Planning and Development) Susantha Abeysiriwardana, speaking to The Sunday Morning, said that the study had concluded that the project was technically feasible but was not financially viable.
“The particular coastal stretch was not considered suitable for a harbour at first glance, but on the insistence of the Minister, a basic conceptual plan for a harbour with two breakwaters was prepared to proceed with a detailed technical feasibility study,” he said, adding that the Government at the time had not been able to secure funding for the project.
He said the study had been carried out by a local engineering consultancy firm and had cost Rs. 22 million at the time, which had been provided by the Treasury.
However, there had been a resurgence in the interest of building the harbour during the Mahinda Rajapaksa Government, and thus in 2017, the then Government had been able to secure a loan from the Danish International Development Agency (DANIDA) – a branch of the Danish Ministry of Foreign Affairs which provides humanitarian aid and development assistance to other countries.
He said that the project had taken around three years to complete and that it had been officially opened in 2013.
Abeysiriwardana said that just two years after its opening, the problem of sand filling into the harbour had begun and the harbour basin had become very shallow and nonoperational; thus the harbour had been deemed commercially unviable.
He said that it cost a whopping $ 3 million (Rs. 544 million) annually to dredge the sand and then transport it over five kilometres to the north of the harbour to discard the excess sand.
Abeysiriwardana explained that the sand movement estimates that derived from mathematical calculations and small-scale modelling were far below the actual situation and that sand filling was many times the estimated amount.
“Trying to estimate the amount of sand filling in through scale models was not sufficient as sand particles were too small and tended to collapse at such a small scale. Therefore, it had not been possible to foresee the current problem through the study,” he said.
He said that the while the project had been considered not feasible financially, the economic viability had given enough reason for the then Government to go ahead with the project.
“The Sri Lanka Port Authority at the time objected to this project being carried out especially as it was financially unfeasible. But, they found it to be economically viable and there was political motivation as well, so they went ahead with the project,” he said, adding that the loan had been repaid to the Danish Government.
He also pointed out that a similar issue was observed in Kirinda on the southern coast as well, where a fisheries harbour built with Japanese grant assistance had begun completely filling up as early as 1995.
With the availability of the Trincomalee Harbour, The Sunday Morning questioned the need for an additional port on the east coast.
“The Trincomalee Harbour is quite sufficient, but the Government went along with it due to political motivations,” he said.
In addition, he said that it could not be used as a fisheries harbour either, due to the sand filling.
Meanwhile, Secretary to the Ministry of Port and Shipping M.M.P.K. Mayadunne said that the Oluvil Harbour had caused a burden to the Sri Lanka Port Authority.
“It has not been operational since the project was declared open. A huge sum was spent on the project, especially due to the repayment of the € 45 million loan, but no operations have been carried out by the harbour to even cover those costs,” he said.
Nevertheless, a possible silver lining for the port could be the new Government’s intentions of moving away from attempting to utilise it as a commercially viable harbour.
Instead, the Government is looking to transform it into a different kind of development project.
Ministry Secretary Mayadunne said that the Minister of Ports and Shipping Johnston Fernando had proposed that it be converted into a mixed development project.
“The Minister is expected to visit the site in the coming week in order to determine what future steps to take. He is keen on turning this into a mixed development venture. There have been many instances where failed projects meant for a particular use have been repurposed for something else. We have many options, including setting up hotels, entertainment parks or theme parks, and even adventure sports,” Mayadunne said.
He said that the Ministry would be submitting a Cabinet proposal in this regard and will then call for tenders.

“We will submit a Cabinet proposal and once it has been approved by the Cabinet of Ministers, we will call for tenders. This can be done as a public-private partnership and we expect the private sector to play a big role as well,” he said.

Crisis behind the power crisis

April 1, 2019 bythemorninglk No Comments
An internal rift in the power sector is threatening to drag the electricity crisis further, with all sides now blaming each other over the failure to prevent the issue from reaching a critical level.

Animals and humans at risk

July 29, 2019 bythemorninglk No Comments
A recent shootout at the Udawalawe National Park has left the public concerned not only for the lives of innocent animals within the sanctuary but also the safety of tourists and visitors.