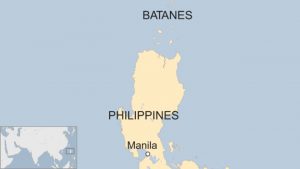 At least six people have been killed and dozens more injured after two earthquakes struck a province in the Philippines.

The earthquakes, magnitudes 5.4 and 5.9, hit the province of Batanes, an archipelago in the north of the country early on Saturday.

Mayor Raul de Sagon said around 60 people were hurt. Many people were in their homes when the earthquakes struck.

No tsunami warnings have been issued.

Police sergeant Uzi Villa told AFP: “We saw houses shaking. Some of the walls of the houses collapsed and fell on the victims. Some people died because they were sleeping soundly since it was still early.”

The Philippines is part of the Pacific “Ring of Fire” – a zone of major seismic activity which has one of the world’s most active fault lines.

US envoy tells North Korea: ‘Let’s get this done’

December 16, 2019 byTSM Web Desk No Comments
US special envoy Stephen Biegun has urged North Korea to come to the negotiating table, saying: "We are here, let's get this done."

July 17, 2020 byTSM Web Desk No Comments
British Airways has said it will retire all of its Boeing 747s as it suffers from the sharp travel downturn.