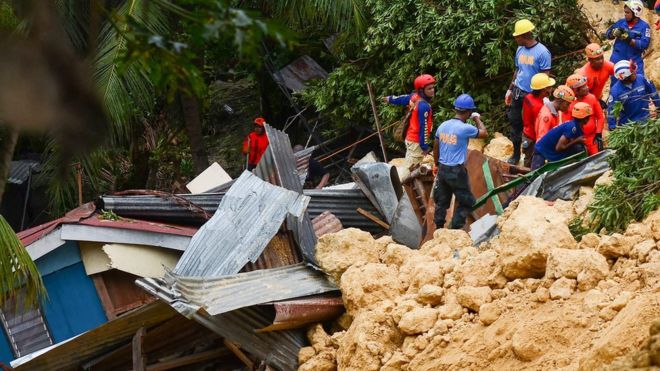 A landslide in the Philippines has killed at least 21 people and left dozens missing, with some texting for help from under the rubble, say police.

The slide on Thursday engulfed two villages in Naga in Cebu province.

It comes days after the north of the Philippines was hit by a typhoon, killing more than 80 people.

Typhoon Mangkhut did not directly hit Cebu province but lead to stronger monsoon rains, increasing the risk of landslides across the country.

The Cebu landslide took out a whole section of hillside on which people had built their makeshift homes.

“It was like an earthquake and there was this thundering, loud banging sound,” resident Cristita Villarba told news agency AP.

“All of us ran out,” she said, adding that her husband and children all survived the disaster.

“Many of our neighbours were crying and screaming for help. Some wanted to help those who got hit but there was too much earth covering the houses, including my brother’s,” she said.

According to local media, more than 600 families from Naga were staying in evacuation centres on Thursday night.

Messages from under the rubble

Local media are citing police chief inspector Roderick Gonzales as saying that several people had been successfully rescued from inside buried houses.

“There were signs of life. Some of them managed to send text messages,” he said, raising hopes that they are trapped in air pockets in the debris.

The more than 20 houses affected were on the outskirts of the town of Naga.

There were near a former limestone quarry which might have destabilised the hillside above the village.

According to local media, local authorities had previously identified the area as being landslide prone. (BBC)

September 5, 2018 byMalik No Comments
When Silicon Valley companies once again appear in front of the US Senate on Wednesday, there will be one major absentee: Google.

September 2, 2019 byTSM Web Desk No Comments
The final list of National Register of Citizens (NRC) in the state of Assam was published on 31 August 2019 in India.