PM says no orders were given to lease Agri. building 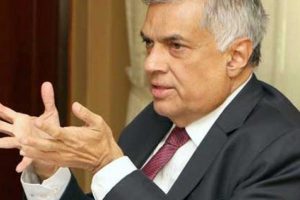 The Prime Minister Ranil Wickramasinghe yesterday said he did not issue directives to Minister Duminda Dissanayake to lease out the controversial agriculture building at an exorbitant amount.

Wickramasinghe was testifying before the Presidential Commission of Inquiry(PCoI) probing into misappropriations and corruption in state enterprises yesterday.

Wickramasinghe said he in no circumstance gave instructions to the Agriculture Ministry to purchase the said building when the Ministry shifted its premises.

The PCoI is probing allegations leveled against the government for signing a lease agreement with D.P. Jayasinghe Group of Companies at an amount of Rs. 1.3 billion, for the occupancy of a private building for the Agriculture Ministry.

The Prime Minister further said under the coalition government he was only responsible for the members of the United National Party (UNP) as their leader while President Maithripala Sirisena was in charge of the Sri Lanka Freedom Party (SLFP) members.

Dissanayake testifying before the PCoI in an earlier occasion however said that he did not peruse the lease agreement and that all required measures to procure the building were taken by the Prime Minister and his office.

He went on to say that the decision taken in 2016 to shift the Ministry of Agriculture was due to persistent demands from the Prime Minister and Parliament and that he had no say in the matter.

“The Prime Minister presented the cabinet paper wherein he mentioned the floor area of the building, the rent, and all other relevant information. This was approved by the Cabinet and I was just implementing that decision as I have a responsibility to carry out their wishes. When you ask me about floor space and other problematic aspects, I have no answer to give you. What can I say?” Dissanayake said before the PCoI.

Gota urged to support probe on him

August 20, 2019 byEaswaran No Comments
Former Defense Secretary Gotabaya Rajapaksa who aspires to be the seventh executive President of Sri Lanka has been urged to refute allegations against him and co-operate fully with all investigations

Public transport to resume in all districts tomorrow

June 7, 2020 byTSM Web Desk No Comments
Public transport services are to operate as usual in all districts from tomorrow (8),  the Transport Ministry Media Unit said.