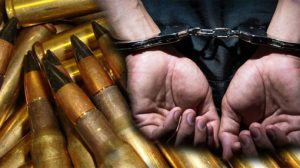 The police have uncovered explosives and weapons from a house of a an ex-LTTE militant in Kilinochchi, the Police Media said.

Grenades, a T-56 rifle, several rounds of live ammunition, t-shirts with the face of slain LTTE leader Prabhakaran and other military items were seized from the location.

The police have apprehended the the ex-LTTE militant, his mother and sister following the raid.

The arrest was made after an officer of the Serunuwara army camp received a tip-off in this regard.

Sajith gets most votes in Nallur, Jaffna

November 17, 2019 byEaswaran No Comments
New Democratic Front Presidential candidate Sajith Premadasa secured the most number of votes in the Nallur polling division in the Jaffna District.