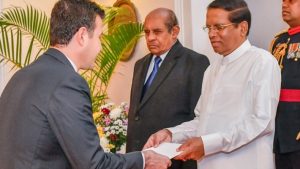 President Maithripala Sirisena said the current free, fair and peaceful Presidential election campaigns were a  reflection of the strength of democracy in the country.

He said democracy was restored due to a broad political transformation that had taken place in the country.

August 11, 2020 byTSM Web Desk No Comments
The ongoing coastal inundation caused by the swell waves in the southern coastal region from Beruwala to Hambantota via Galle, has been causing inconvenience to motorists driving along Galle Road as b

45 at elders home in Modara test positive for COVID-19

December 19, 2020 byMihi Perera No Comments
A total of 45 people have been infected with COVID-19 in an elders' home in the Modara area, stated Modara Medical Officer of Health Dr. Sasanka Ranasinghe.