Pope appoints Sri Lankan as Secretary of the Pontifical Council 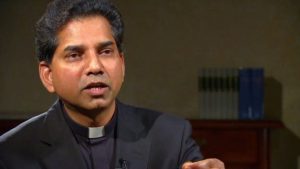 Pope Francis on Wednesday appointed a Sri Lankan as the Secretary of the Vatican’s Pontifical Council for Interreligious Dialogue (PCID).

Msgr. Indunil Janakaratne Kodithuwakku Kankanamalage, currently the under-secretary of the Council, is a member of the clergy of the Diocese of Badulla, Sri Lanka, Vatican News reported.

Msgr. Indunil was born in 1966 of a Buddhist mother who converted on marrying a Catholic.  Two years after his priestly ordination in the Diocese of Badulla on 16 December 2000, he was sent to Rome where he obtained a doctorate in missiology from the Pontifical Urban University.   The university later hired him as a professor at its Faculty of Missiology.

On 12 June 2012. Pope Benedict XVI appointed him Undersecretary of the Pontifical Council for Interreligious Dialogue.

The Pontifical Council for Interreligious Dialogue was established by Paul VI on Pentecost Sunday 1964, with the aim of promoting dialogue with persons of other religions, in line with the spirit of the Second Vatican Council, especially its declaration, “Nostra Aetate”.

It is a dialogue which while witnessing to one’s own faith is, at the same time, open to that of others.  This is neither a betrayal of the Church’s mission nor a new method of conversion to Christianity.  All this has been clearly established in the Encyclical Letter, “Redemptoris Missio”, of Pope John Paul II.

Although the Pontifical Council is the central body for dialogue in the Catholic Church, this commitment is carried out primarily through the local Churches.  Many of the local Churches, in fact, have dialogue commissions at the regional and national levels and the Vatican’s Pontifical Council works in close collaboration with these commissions, encouraging their creation where it is lacking.

The PCID is composed of about 30 members and some 50 councillors from across the world from various backgrounds and expertise, serving as consultants, specialists in religious studies or are engaged in the field of dialogue.

April 6, 2020 byTSM Web Desk No Comments
1 patient has tested positive for COVID-19 today, bringing the number of total cases to 176 in the country, Health Ministry said.

May 11, 2020 byTSM Web Desk No Comments
The Constitutional Council is to meet today at 4.30 pm at the Speaker's official residence, the Parliament’s Department of Communication said.