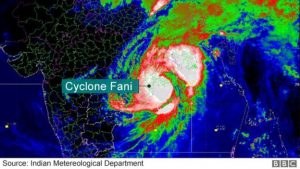 A powerful cyclone has slammed into India’s eastern coastline, bringing torrential rains and winds of up to 200 km/h (125mph).

Cyclone Fani, one of the most severe storms to hit the region in recent years, made landfall at 08:00 local time (02:30 GMT) on Friday.

More than one million people have been evacuated from the eastern state of Orissa, also called Odisha.

Officials say two people have been killed in the state.

Flooding has also been reported in several areas, and forecasters say a storm surge of 1.5m (5ft) could threaten low-lying homes.

The cyclone made landfall in the tourist town of Puri, which is home to the 858-year-old Jagannath temple.

It is expected to hit 15 districts in Orissa, one of India’s poorest states, before weakening on Saturday. (BBC)

April 5, 2019 byRandev No Comments
The world's richest man, Jeff Bezos, and his wife MacKenzie have agreed to a record-breaking divorce settlement worth at least $35bn (£27bn).