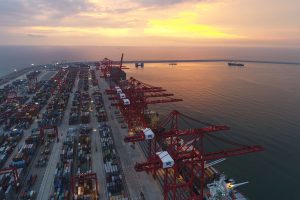 Power and Energy Minister Ravi Karunanayake’s controversial proposal to procure 400 MW of supplementary power from a Turkish company is facing new obstacles with a lack of berthing facilities for powerships at the Galle and Colombo Ports.

The issue with regard to the berthing of the Turkish powership arose as the Galle Port did not have adequate space to berth a powership while Sri Lanka Ports Authority (SLPA) refused to allow it to berth in the Colombo Port with the view that it would hamper the day-to-day activities of the port as it would need to be berthed for a period of around six months.

Power and Energy Ministry Director – Development and Media Spokesman Sulakshana Jayawardena told The Sunday Morning that Cabinet approval was obtained for the Turkish power proposal, which was to be connected to Kerawalapitiya and Galle. However, later, the Technical Evaluation Committee (TEC) proposed it not be connected to Kerawalapitiya due to transmission restrictions and instead be moved to the Colombo Port.

However, the SLPA had said that there was inadequate space at the Galle Port and proposed to allow it to be berthed outside the port. They had also indicated they could provide facilities to berth the powership at the Colombo Port for a shorter period, Jayawardena said.

In April, presenting an immediate solution to tackle the power crisis, Karunanayake submitted a proposal to procure 200 MW of power at a cost of Rs. 24.98 per unit from a barge stationed in Kerawalapitiya for a six-month period from the Turkish company Karadeniz, which was later approved by the Cabinet.

However, the TEC rejected the proposal, claiming it was not transparent and feasible as it did not give the green light to connect the powership in Kerawalapitiya due to transmission restrictions. It was then moved to the Colombo Port.

However, the proposal is still being evaluated by the TEC and a long process is yet to be followed before it commences.

When The Sunday Morning contacted Ministry of Ports and Shipping Secretary Admiral S.S. Ranasinghe (retd.), he said the SLPA had not given permission to berth the powership at the Colombo Port as it could hamper the day-to-day activities of the port as it needed to be berthed for about six months.

“But we had given permission to berth the ship at the Colombo South Port, which is the best option available,” he said.

According to Jayawardena, once the proposal is evaluated by the TEC, it will be sent to the Standing Cabinet Appointed Procurement Committee (SCAPC), Public Utilities Commission of Sri Lanka (PUCSL), Cabinet of Ministers, and the Attorney General’s (AG) Department.

At present, the proposal is with the TEC and the Ministry said it was unaware of how long it would take for the proposal to be implemented by the Ceylon Electricity Board (CEB) to purchase the supplementary power.

“Even though the supplementary power was sought only for a short period, it had to follow a long process,” Jayawardena added.

In the meantime, coal power is back in the limelight after Cabinet approval was granted for four new coal power plants to be commissioned between the periods of 2022 and 2025.

Environmentalists, however, raised concerns over the Government’s decision and held a demonstration in front of the CEB last week, urging the Minister to withdraw the plans. In response to the protests, Ministry Spokesman Jayawardena said the protesters had discussed the issue with CEB officials and will meet the Minister next week for further discussions.

Explaining further, Jayawardena said: “We have agreed to cut off a certain amount of greenhouse gas emissions in the power sector and we have already pledged this to the international community by ratifying UN conventions. We intend to reduce greenhouse gas emissions by 4% by 2030, voluntarily. We have set nationally determined contributions (NDC) and our generation plan is developed based on those agreements. Therefore, there is no violation of government policies.”

He explained that the plan contained proposals for the commissioning of coal power plants, which was needed for the country to meet its low-cost energy requirements.

While some are protesting against the commissioning of coal power plants in the country, several others claimed the Ministry had taken steps to ban the implementation of rooftop solar systems, thereby curtailing solar generation.

Responding to the allegation, Jayawardena said: “The Government targeted to produce 50% of the energy requirement through renewable energy by 2030. The Ministry did not ban rooftop solar power purchases, but it requested them to pay for their energy consumption while the CEB purchased the solar power from them.

“We are in the process of developing large-scale solar power plants, such as 100 MW solar power parks. The feasibility studies are currently being conducted. One solar park will be established in Pooneryn while another is planned for Siyambalanduwa.

“A few months ago, we signed an agreement with a Canadian solar company to put up a 100 MW floating solar plant in Maduru Oya and there are further plans to add 100 MW wind power plants to the system,” Jayawardene said.

April 26, 2019 bythemorninglk No Comments
As the country celebrated the Sinhala and Tamil New Year on a grand scale last week, some plantation workers were engaged in part-time jobs to earn some extra money to manage their daily needs.

January 14, 2019 bythemorninglk No Comments
The current Government’s term is nearing its end soon and civil society activists have no faith in investigations underway on major killings that occurred during the previous regime.