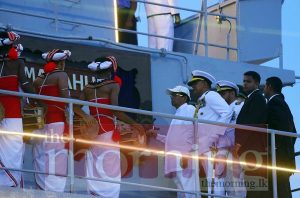 The commissioning took place at the Eastern Container Terminal of the Colombo Port.

The Commanding Officer of the ship, Captain Nalindra Jayasinghe received the Commissioning Warrant from the President.

Built in 1994, the ship is 112 meters long and 12.4 meters wide, with a capacity of 2300 tons. The ship is staffed by 110 personnel, including 18 officers. After joining the Sri Lanka Navy’s fleet, it will be used for search and rescue operations, protection of marine resources and relief for naval ships and vessels in the deep sea region of Sri Lanka.

Dias and ambassador to Sri Lanka Cheng Xueyuan were present at the event.

Pictures by Lalith Perera and the President’s Media Division

July 22, 2020 byTSM Web Desk No Comments
The five-member committee which was appointed to investigate the unpermitted demolition of the 13th Century building believed to be the King’s Court of King Buwanekabahu II in Kurunegala, handed over

April 28, 2019 byRandev No Comments
Under the Emergency Regulations, the covering of the face to avoid identification has been banned.