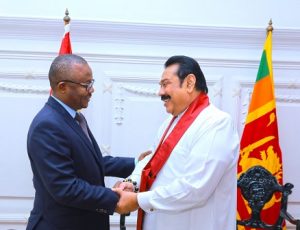 During the meeting, discussions were held on bilateral and multilateral fora.  The two leaders also discussed on improving trade, tourism and investment potential of the two countries.

The visiting President was received at the Colombo International Airport by the State Minister Susil Premajayantha.

Guinea-Bissau is a tropical country on West Africa’s Atlantic coast.

March 29, 2019 byRandev No Comments
The expenditure heads of the Ministry of Highways and Petroleum Resources Ministry was taken up for a vote in Parliament today (29).