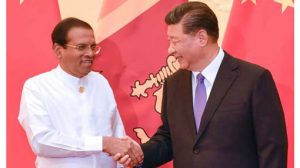 After a brief official visit to China, President Maithripala Sirisena has returned to the island after attending the Conference on Dialogue of Asian Civilisations (CDAC).

It was reported that President Sirisena and the delegation that attended this conference arrived early this morning (16) at the Bandaranaike International Airport.

In discussions held with President Jinping, a deal was also formulated, on the request of President Sirisena, for Sri Lanka to receive a grant of Rs. 2.6 Billion to empower national security.

The President also addressed the Conference on Dialogue of Asian Civilizations, which was held in Beijing on Wednesday (15) morning.

November 7, 2019 byTSM Web Desk No Comments
NDF Presidential Candidate Sajith Premadasa in a statement today said if he were voted into power, he would appoint a Prime Minister who commands the confidence of Parliament .

January 16, 2019 byThe Sunday Morning No Comments
The United States and Sri Lanka had key talks in Washington focused on the developments in Sri Lanka following the political crisis.