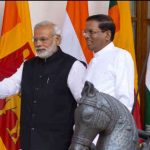 The Indian Minsitry of External Affairs said that both leaders warmly welcomed each other and that Sirisena extended his wishes to Prime Minister Modi on his astounding party win and reiterated his desire to work together to strengthen relations between the two countries for peace, prosperity and security in our region.

The leaders further noted that terrorism and extremism continue to pose a threat to humanity and committed to closer bilateral cooperation for peace and security in South Asia and the Indian Ocean.

January 7, 2020 byTSM Web Desk No Comments
Former Sports Minister Harin Fernando said he should be defended by the Attorney General in case filed against him by former Sri Lanka Cricket (SLC) Thilanga Sumathipala.

March 31, 2020 byTSM Web Desk No Comments
Operations of the Hatton National Bank (HNB) kollupitiya branch has been shut down for a period of 14 days.