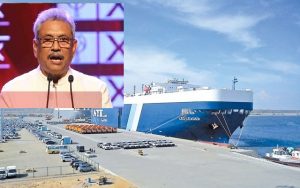 President Gotabaya Rajapaksa says he will renegotiate the Hambantota Port deal with China.

Rajapaksa expressed these views during an interview with Nitin A. Gokhale, Editor-in-Chief of BharatShakti.in and SNI.

“Even though China is a good friend of ours and we need their assistance to develop, I’m not afraid to say that the deal was a mistake. I will request them to renegotiate and come with a better (deal) to assist us,” Rajapaksa said.

The former Government signed a 99 year lease agreement with China on the Hambantota Port.

“Today the people are unhappy about that deal, and we have to think about what will happen in the future,” Rajapaksa said.

“Giving a small land for investment is a different thing. To develop a hotel or a commercial property is not a problem, that’s not an issue. The strategically important, economically important harbour, giving that is not acceptable. That we should have control. We have to renegotiate. Giving a terminal for an operation is a different thing, giving some location to build a hotel is different, not the control over a very important place, it is not acceptable. So that is my position,” Rajapaksa highlighted.

Rajapaksa said he will closely work with India and China.

“Diplomatic relations and economic relations are everywhere. India is working closely with China. I know Indian investment goes to China, Chinese investment comes to India. Like that, we want investments and help but we will not do anything, we don’t want to get involved in military and geopolitical rivalry.”

He said world powers like India, Singapore, Japan, Australia in reality are scared of Chinese involvement. Rajapaksa however said China was of commercial importance to Sri Lanka.

“We are a small country and we want foreign investment to improve our economy. So I invite India, Singapore, Japan and Australia to come and invest here. Don’t allow only China to invest. These governments must encourage their private companies to come and invest, come and help us. Without leaving it to one country and then grumbling,” Rajapaksa  pointed out.

Batik makes it to the House