April 2, 2019 by themorninglk No Comments 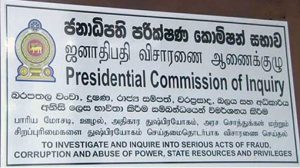 The Presidential Commission of Inquiry began its inquiry into activities of the incumbent United National Front (UNF) Government.

Its mandate is to summon public complaints, information, and other details and swiftly conduct impartial and comprehensive investigations into allegations against individuals who held or remain in political positions as well as public servants and officers of the statutory boards who held or remain in those positions, regarding serious losses or damage caused to state assets and revenue as a result of the acts of corruption, fraud, and criminal breach of trust, criminal misappropriation of property, cheating and abuse of power or authority, state resources, and privileges committed by these individuals during the period from 15 January 2015 to 31 December 2018.

The Commission also identifies persons who were or are currently responsible in accordance with the laws and regulations and collects evidence on those offences or acts.

At present, the Commission is investigating two cases.

The first is the project by the Ministry of Agriculture, Rural Economic Affairs, Livestock Development, Irrigation, and Fisheries and Aquatic Resources Development to import 20,000 heifers from Australia for the purpose of enhancing the country’s milk production and to achieve self-sufficiency in milk production by 2020 and the alleged fraud that had taken place in relation to it.

The project was initially initiated by then Economic Development Minister Basil Rajapaksa in 2014, during the Rajapaksa regime.

The Government entered an agreement with Wellard Rural Exports (Pvt.) Ltd. of Australia at the time.

However, the project was revived only in 2017, by the Current Minister of Agriculture, Rural Economic Affairs, Livestock Development, Irrigation, and Fisheries and Aquatic Resources Development.

The Presidential Commission heard evidence from Amal Sooriyage, who invested in the project for his farm Lamemore Dairy Farm in Maskeliya.

He informed the Commission that he had seen an advertisement and had applied for the venture, buying 200 heifers, that according to the agreement he signed were supposed to be healthy, pregnant, and produce an average of 20 litres of milk a day, from the Australian company at a cost of Rs. 520,000 each – he paid Rs. 200,000 while the Sri Lankan Government subsidised the remaining Rs. 320,000.

He received 100 cows on 13 February 2018 and a second batch on 27 February 2018. The latter were malnourished and some of them had other deformities such as broken or torn udders, missing tails, and nine of them were not pregnant.

A service provider named Foresight Engineering had been given the responsibility of looking after the livestock – for health-related issues in particular – by the Ministry of Rural Economic Development for the first six months. Veterinary Surgeon Dr. Viraj Perera arrived at his farm to look after the cows.

It was immediately evident that Dr. Perera was vastly inexperienced and ill equipped, Sooriyage said, and presented video footage of Dr. Perera attempting to deliver a calf that was stuck in the heifer’s womb with the use of only a rope. The heifer’s uterus had come out of its body with its calf and the calf and heifer both died after the procedure.

Sooriyage said that by May 2018, nine cows died due to an unknown ailment while 25 had stillbirths or failed abortions.

He informed the Presidential Commission that Dr. Perera, who became a veterinary surgeon (VS) in 2017, and his team appeared to be gaining experience as veterinary surgeons while providing him services at the farm.

Sooriyage had then decided to call Dr. Suresh Kumar, a local VS, to carry out post-mortems on the deceased cows and to test them for diseases.

On 7 February 2019, Sooriyage received the results which stated that the samples tested positive for Mycoplasma bovis.

Sooriyage said that he had informed Dr. Sagarika Sumanasekara – a Ministry official involved in the project – about the matter, but had only received responses attempting to deflect responsibility from the Ministry.

In his letter to Dr. Wedasinghe dated 14 February 2018, Dr. Silva said that there was positive presence of bovine viral diarrhea (BVD) as well as Fasciola hepatica – diseases not found in Sri Lanka.

In the letter, Dr. Silva requested that the history of all animals imported be obtained, and noted that Fasciola hepatica “infects the livers of mammals, including humans”. It also strongly recommended seeking the advice of the Head of the Department of Parasitology as it was a matter of public importance.

Dr. Silva, in the letter, went on to say: “Delayed communication in the findings that cows have been tested positive for BVD is a serious lapse which may result in irreparable damage to the Sri Lanka dairy industry”, and requested to hold discussions with the Additional Director General of Veterinary Research and Director of Animal Health, Planning and Economics, and Veterinary Research.

Dr. Silva also stated in this letter that the Secretary to the Ministry of Rural Economic Development must be notified.

A letter sent by Dr. Wedasinghe to the then Secretary of the Ministry of Rural Economic Development Renuka Ekanayake said: “Positive results for Fasciola hepatica found in Badulla District. Treat all animals in this consignment with broad spectrum anthelmintic, effective against all stages of Fasciola hepatica.”

Dr. Wedasinghe also said: “Cull and destroy the positive animals and the supplier is to compensate the loss of the farmer.”
Sooriyage said that as of 12 March 2019, a total of 110 cows and 161 calves had died.

“My farm is now a cemetery. We do more post-mortems and burials than anything else on the farm.”

The second case currently before the Presidential Commission of Inquiry is the importation of a cancer treatment drug trastuzumab and alleged irregularities in the tender process.

Rohana De Silva, an official of the Procurement Division of the Ministry of Health, presenting evidence before the Presidential Commission, said that there had been a shortage of trastuzumab in 2015 and that the State Pharmaceutical Corporation (SPC) informed the Ministry of Health on 7 December 2015 that a total of 5,000 vials were needed, which cost Rs. 1,006 million.

In June 2016, bidders were called and six bids were made. Four were unresponsive while the two responsive ones were Bauers (Pvt.) Ltd. and Pharmace (Pvt.) Ltd.

Pharmace made a bid of Rs. 720 million while Bauers bid Rs. 825 million for the consignment of 5,000 vials of 440 mg trastuzumab with solvent in 20 ml vials and the TEC recommended the former be given the tender.

However, Dr. Abeysinge of the TEC was not in agreement with the recommendation, and had stated that it was not a safe drug to be used for the specified treatment and that there were alternatives.

Thereafter, it was recommended by the SPC, since the decision of the TEC was not unanimous, that an additional two members be appointed, Rohana De Silva said.

He also noted that it was the then Ministry of Health Secretary Anura Jayawickrama that made the appointments of Dr. U Saravanamuttu and Dr. N.A.M. Neththicumara, both oncologists, on 5 October 2016.

Presidential Commission Chairman Justice Abeyratne then questioned why the first list of candidates for the TEC contained eight doctors from the Maharagama Cancer Hospital – where Dr. Abeysinghe treated patients – when the second list didn’t list any candidates from the hospital.

On 13 October 2016, the TEC once again submitted its recommendation to award Pharmace the tender.

However, Dr. Obeysekara and Dr. Abeysinghe were not present at this time as they were overseas.

With regard to Bauer, a Presidential Secretarial Procurement Board (PAB) appointed by Procurement Appeal Board probed the tender process and thereafter dismissed Bauer’s appeal.

However, the PAB did not endorse the recommendation of the TEC and requested that the views of the two absent TEC members be obtained.

The representative of the Attorney General’s Department who was leading the witness during the Presidential Commission Sittings informed the Chair that the tender process was ongoing and that the inquiry would continue on a later date.

The Presidential Commission of Inquiry is to continue hearings and hand over its first report within three months and the final report with conclusions within six months to President Maithripala Sirisena.

May 12, 2019 bythemorninglk No Comments
The Tamil National Alliance (TNA) and the Tamil Progressive Alliance (TPA) have decided to work together on issues faced by the Tamils following the Easter Sunday attacks.