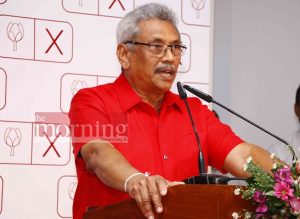 Instructions have been issued by the President’s Office to all permanent ministry secretaries including the Prime Minister’s Secretary, not to accept or entertain any form of communications from the private staff or any other officer of the Prime Minister’s Office, ministry, or state ministry.

Secretary to the President Dr. P.B. Jayasundera had issued the instructions to all ministry secretaries on Friday (7), The Sunday Morning learnt.

The ministry secretaries had been given instructions that members of the private staff of the Prime Minister, any minister, or state minster ordering, requesting, or issuing instructions related to any development project or any other government work through letters or telephone calls should not be permitted and/or entertained.

This has been formally communicated through a letter issued during a meeting held with the ministry secretaries
on Friday.

The latest directive has been issued to avoid any sort of corruption or abuse of power within the Government and prevent using the name of the Prime Minister, ministers, or state ministers to take undue advantage .

Furthermore, the directive had noted that the sole authority to inquire about any project or related work of any government institution would be vested with all permanent secretaries to the ministries.

Acknowledging the letters given by Dr. Jayasundera, Secretary to the Ministry of Justice J.J. Ratnasiri told The Sunday Morning that private staff members cannot interfere with the ministry/institutional work according to government sector rules, but the rule was not being practiced in the past.

“There was no room for private staff members to interfere with government work, but there are many instances where they have been interfering,” he stressed.

Ratnasiri said the decision had been taken by the President’s Secretary to prevent any corruption in the Government.

April 9, 2020 byTSM Web Desk No Comments
The European Union (EU) and its Member States are working with partners around the world to tackle the outbreak of the coronavirus pandemic and mitigate the effects of the crisis.