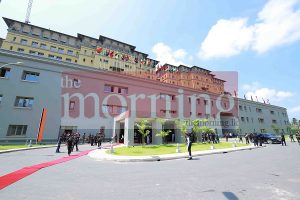 The construction of the new security forces headquarters commenced in 2011.

Sirisena revealed that the state had incurred Rs 42 million as monthly rent to temporarily house the Army Headquarters in various locations until the construction of the new building was completed.

The new Army Headquarters has been constructed with an estimated cost of Rs. 53.3 billion.

After the land housing the Army Headquarters was given away for the Shangri-la and hotel projects, former defence secretary Gotabaya Rajapaksa made plans to re-establish the security forces building in Battaramulla.

October 21, 2019 byTSM Web Desk No Comments
Ven. Galagoda Atte Gnanasara Thero and 3 others have been ordered to appear before the Court of Appeal on 8 November over a case of Contempt of Court.

January 26, 2020 bythemorninglk No Comments
The Government is estimated to have lost around Rs. 10.47 b through direct placements of Treasury Bonds between 1 January 2005 and 28 February 2015, according to the Central Bank Forensic Audits.