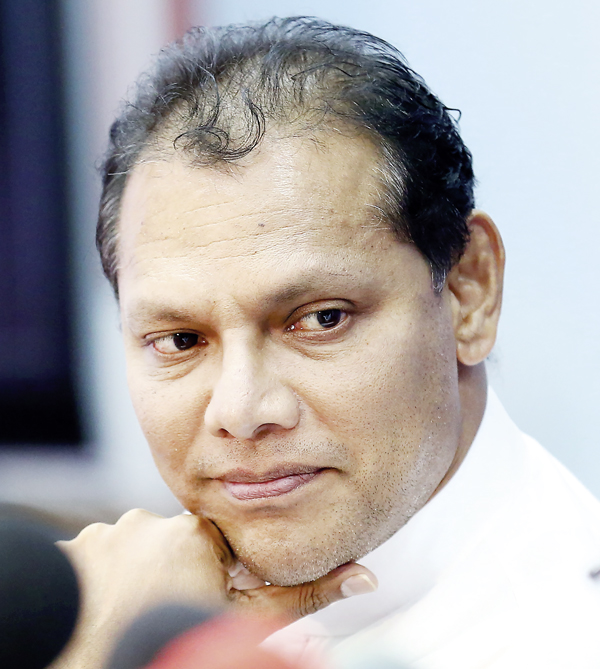 How will the SLFP face the upcoming presidential election?

We haven’t decided on a stance yet or if we would put forward a candidate ourselves. We are carrying out work to further strengthen the party. We are active islandwide in this and all our members are taking part. We are striving to ensure the party is ready to face any upcoming election, whether it be a presidential election or otherwise.

There was a meeting between President Maithripala Sirisena, in his capacity as the Head of the SLFP, and Opposition Leader and SLPP Leader Mahinda Rajapaksa regarding the proposed alliance. What came of it?

Yes, they had discussion but nothing conclusive was reached. However, the two party leaders are expected to meet several more times in the future to continue discussions.

Several hardcore SLFP members are not happy with the fact that you’re having discussions with the SLPP as they believe they need to safeguard the SLFP identity. Has the relationship with the SLPP divided the SLFP?

What is happening is that some individuals, thinking only of their personal agendas, have opportunistically jumped ship and sided with the SLPP in the hopes of getting more votes at the future parliamentary elections. Purely for personal reasons, they have sided with the SLPP as they believe that it is their only chance to get voted into Parliament the next time around.

We are making decisions in consideration of the party and its future. How many more members we can obtain, who our future candidates could be, how we can work better with our provincial and local government councillors – these are what we think about and consider when it comes to our political future. We don’t think about personal gain but about the betterment of our party.

We have no intention of joining the SLPP for personal gain.

So you are aligning with the SLPP for the sole purpose of ensuring a United National Party (UNP) defeat?

No, it’s not like that. We are going forward with this alliance with our own agenda and course of action. What is important is how the people are suffering as a result of the bad governance carried out by the UNP-led Government. So by strengthening the UNP, you will only push the country further into chaos under (Prime Minister) Ranil Wickremesinghe.

What we hope to do is to come together with the parties of the progressive left so that we can take the country forward. We will take all the necessary steps to reach this goal while ensuring that the SLFP is not weakened along the way.

You say you seek to align with leftist political parties, so wouldn’t the JVP be your ideal choice?

Even though the JVP is a political party from the left, they have supported the candidates put forward by the UNP-led alliances – either directly or indirectly. The JVP, as a leftist party, has continuously worked to protect the UNP Government. So in the future, if we can come to a common consensus with the JVP, we believe it will be a great strength to us and that the JVP would be willing to ally with us.

But some of these senior SLFPers – for example, SLFP MP Kumara Welgama – have said that having talks and seeking an alliance with the SLPP was detrimental to the SLFP and the latter must be safeguarded. What have you to say about that?

No, it will not be like that. If that’s the case, then the SLFP must contest the presidential election alone. If the SLFP contests separately, it will split the vote more which will allow the UNP to emerge victorious. We have no intention of allowing the UNP to win. So the SLFP will take decisions which will not allow the party to be weakened. We are in discussions with the SLPP as well.

There is talk of senior SLFPers such as Kumara Welgama, Duminda Dissanayake, and several others joining the United National Front-led alliance. How do you see this?

No, I don’t think they would side with the UNP. We believe that MP Duminda Dissanayake is with the party and will respect decisions taken by our party. MP Kumara Welgama was actually with the SLPP initially, but he has not taken its membership and has now returned to the SLFP once again. We have warmly welcomed him back to our party. We strongly assert the stance that our members must stay in the party and work from within for its benefit and not against it by supporting other political parties.

Opposition Leader Mahinda Rajapaksa is a senior advisor to the SLFP but is also the Leader of the SLPP and campaigns for the latter. Why hasn’t the SLFP taken any action against him?

Yes, we discussed this issue during the SLFP Central Committee meeting last week. It is completely illegal to become the leader of a political party when that individual is a member of another political party. It is a serious offence and could result in him losing his parliamentary seat. So we are discussing this matter and expect to take action in the future.

What is the role of former President Chandrika Bandaranaike Kumaratunga in the SLFP?

There is talk that she has been sidelined when it comes to the internal affairs of the SLFP. Is this so?

No, she took part in a meeting of national organisers this week. Last week, we invited her to the SLFP Central Committee meeting but due to an urgent matter she was unable to attend.

Nevertheless, she is directly involved in activities of the SLFP.

Do you think that an SLFP-SLPP alliance, if it is formed, can genuinely address the issues of the minorities?

No, there is a serious problem there. When you take the SLPP, it is largely driven by racist and extremist elements. But the SLFP is neither racist nor extremist. Our Leader Maithripala Sirisena is also neither. He looks at all people equally. So if the SLPP and the SLFP join forces, it will be the SLFP which will bear the responsibility of ensuring the rights of the minority communities. If the SLPP attempts to contest this election without the SLFP, they will not be able to garner the votes of the Tamil and Muslim communities.

But you think if the SLFP lends its support, the minority community would be inclined to vote for Gotabaya Rajapaksa?

Yes, if the SLFP lends its support, the minority communities will cast their vote with us as they have faith in Maithripala Sirisena.

If the SLFP is to contest alone, who would be your candidate?

We are still of the stance that President Sirisena should contest once again as the candidate of the proposed alliance with the SLPP. If there is an issue and we cannot go forward with the SLPP alliance then we will go ahead and contest the elections alone.

So in such a situation, President Sirisena would be the presidential candidate of the SLFP?

So who then would the SLFP nominate be?

We will have to decide that when the time comes, taking into account all factors of the day.

No, I have no intention of doing so.

Agreement must be reached to prevent clash: Gayantha Karunatileka

No need for IPKF to say sorry: BJP MP

November 18, 2018 bythemorninglk No Comments
The Indian Peacekeeping Force (IPKF) was accused of committing abuses when it fought Sri Lanka’s war, but a top Indian ruling party Parliamentarian said that India did not need to apologise as........