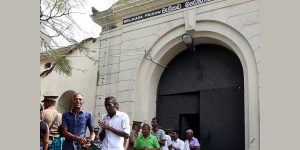 The Commissioner General of Prisons informed the Court of Appeal that the President is yet to provide any information to the Prisons Department of when and where the convicted drug offenders are to be executed.

The Commissioner General came forward with this statement during the hearing of the Writ petition filed by journalist Malinda Seneviratne seeking a court order against the implementation of the death penalty.

T.M.J.W. Thennakoon told the court that he has still not received official notification from the President on the dates, time and locations where any prisoner is to be executed.

He further said that presently there is no exception status of any of the prisoners under his custody to be executed.

May 14, 2019 byEaswaran No Comments
The Police have declared an island-wide curfew from 9pm tonight to 4am tomorrow.