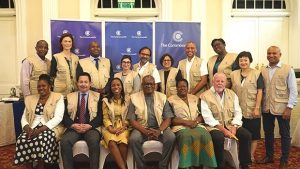 Commonwealth Observer Group (COG) announcing its preliminary findings today highlighted that Private media was largely unregulated in the days leading up to the presidential polls.

“We note that for this election, the Election Commission was empowered to regulate public media through a set of media guidelines. However, it appeared that private media was largely unregulated.”

Commonwealth Observers recommend that ahead of the next election, both private and public media are independently regulated through a legal framework.

The mission added that another issue of concern was the use and promotion of hate speech through private media, as well as on social media platforms, to conduct campaigns, including well after the 48 hours deadline.

The mission further highlighted the need for mechanisms to regulate campaign finance in order to ensure transparency, accountability and an even playing field.

“We further noted ethnic and religious tensions that characterized aspects of the pre-election environment. We observed that some groups experienced fear and intimidation,” the Mission added.

The group urged all citizens and political and community leaders to prioritize unity, and to demonstrate the values of respect and tolerance in political life.

May 29, 2019 byEaswaran No Comments
Inspector General of Police (IGP) Pujith Jayasundara has filed a Fundamental Rights (FR) petition in the Supreme Court against his removal.