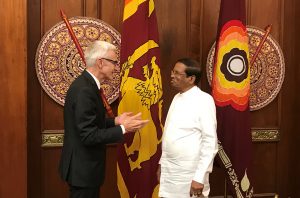 Plans to connect additional specialized law enforcement units across the country are currently underway, as well as a proposal for a project to further strengthen Sri Lankan efforts to combat terrorism, the INTERPOL said in a statement.

This would focus on suspect identification, reduction of mobility, tackling online terrorist presence, identification of illicit weapons and materials, and disruption of terrorist financing.

Discussions were also held on enhanced use of INTERPOL’s global databases in the fight against terrorism.

Immediately following the 21 April bomb attacks in Sri Lanka, INTERPOL deployed an Incident Response Team (IRT) at the request of Sri Lankan authorities to provide on the ground support to the investigation.

The IRT was the first international team to arrive in Colombo after the attacks, and included expertise in areas including counter-terrorism, explosives, analysis and Disaster Victim Identification.

“Following a terrorist attack it is essential for the law enforcement officials on the ground to have access to any and all information which could prove vital to their enquiries,” said Secretary General Stock.

“The cooperation between the Sri Lankan authorities and the IRT was excellent both throughout and after the team’s deployment, resulting in a number of strong leads and arrests.

“My meetings with the President, Prime Minister and Acting Inspector General of Police have demonstrated Sri Lanka’s ongoing commitment to international police cooperation, and I look forward to our continued joint efforts in enhancing global security,” added the INTERPOL Chief.

One of the alleged ringleaders behind the bomb attacks, Ahamed Milhan Hayathu Mohamed, was arrested in the Middle East following the publication of an INTERPOL Red Notice, or internationally wanted persons alert.

During his first official mission to Sri Lanka the INTERPOL Chief was also briefed by Senior Deputy Inspector General Ravi Seneviratne, Head of CID and the National Central Bureau (NCB) in Colombo, where the IRT was based during its deployment.

Expansion of access to INTERPOL’s network to key border control points has already seen millions of checks conducted against the Organization’s databases of wanted persons, stolen and lost travel documents and stolen vehicles.

September 19, 2019 byTSM Web Desk No Comments
The Defense Ministry yesterday issued a statement refuting news stories on alleged terrorist attack similar to the Easter Sunday bombing carried out with the assistance of some Army personnel.

May 24, 2020 byBernadine Rodrigo No Comments
The Cabinet of Ministers has approved the obtaining of a Rs. 16 billion short-term loan on behalf of the Samurdhi Department to pay the Rs. 5,000 allowance to low-income people affected by the outbrea