Protest opposite Swiss Embassy called off 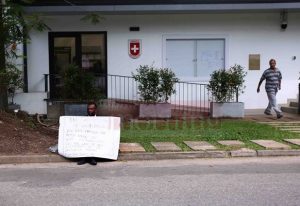 Former UPFA Provincial Councillor Major (Retired) Ajith Prasanna has called off his protest fast before the Swiss Embassy in Colombo.

This was upon the requests of Parliamentarian Athuraliye Rathana Thero and Rear Admiral (Retired) Sarath Weerasekara.

The protest fast was launched yesterday(2)demanding the Swiss Embassy staffer involved in the alleged abduction incident be produced to make a statement to the police.

The victim has not provided a formal statement to the police up  to date.

Meanwhile, The Ministry of Foreign Relations in a press statement yesterday said the victim’s story did not corroborate with witness interviews and technical evidence collected by the Criminal Investigation Department (CID) of the Police.

April 28, 2020 byTSM Web Desk No Comments
Director General of Health Services Dr. Anil Jasinghe has issued a set of guidelines to be followed by pregnant women amid the COVID-19 outbreak.