Protests are a blessing for Murali movie!

Release of the “motion poster” itself of the Muttiah Muralitharan biopic 800 last week has created a huge uproar in Tamil Nadu, India. That will indirectly be for the huge advantage of the movie, mainly regarding its pre-production propaganda, our sources in Tamil Nadu revealed on Friday (16). 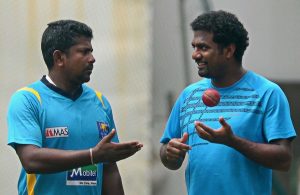 “The protests that have erupted here can give the film an extra mileage with regard to its propaganda long before its screening,” a journalist attached to one of the leading newspapers in Tamil Nadu told The Sunday Morning Sports.

When asked if the protests that have cropped up in the South Indian State are a covert part of movie propaganda, he, who talked on the condition of anonymity, did not deny the point outright.

“It may be the case. Anyway, people will go to watch it in numbers when it is released probably next year. A movie involving the life of a cricketer can always be a huge crowd-puller in this part of the country. If the film can impress the first round of viewers, then it can be a super hit,” he added.

Tamil cinema hero Vijay Sethupathi has already been painted a traitor of the Tamils for playing the world’s highest wicket-taker Muralitharan’s life. Why? Muralitharan, though being a Tamil himself emerging from the Central Hills in Sri Lanka with an Indian ancestry, is considered in Tamil Nadu as an “anti-Tamil”.

Troubles erupted last week after the motion poster of 800 – 800 is the number of Test wickets the off-spinner has taken, which is considered a world record difficult to be shattered – was released. It has evoked strong protests from pro-Tamil groups in Tamil Nadu with the social media platform Twitter exploding with the hash-tag “ShammeonVijaySethupathi”.

‘I don’t lose your love’

“The film depicts Murali’s struggle as a Tamil kid from the tea estate of the island nation’s central region of Kandy amidst a civil war between the nation’s Tamil rebels (from the North and East) and the Sinhala-majority government,” one media report emerging in India said last week.

It further added: “When the film was announced last year with Sethupathi as the lead, there were loud protests claiming that Murali was a supporter of the Rajapaksa Government accused of genocide of Tamils during the final stages of its war against the LTTE in 2009. At that time, Sethupathi had declared that the film would not portray anything that would hurt Tamils since ‘I would not like to lose the support of the people who love me’.”

Tuesday reignited the controversy with Tamil activists recalling Murali’s pro-Rajapaksa comments and his support for the military action against the LTTE.

“Many of them questioned how Sethupathi could wear the white t-shirt with the Sri Lankan flag embossed on it ‘since it stood for a government that massacred Tamils’. Social media was flooded with similar messages, urging Sethupathi to pull out from the film. The return of the Rajapaksa brothers as President and Prime Minister has also fuelled the controversy,” one news report stressed.

The Tamil film is to be shot in Sri Lanka, India, the UK, and Australia from next year and it will be released by the end of 2021. It will also be dubbed in all South Indian languages as well as Hindi, Bengali, and Sinhalese. An international version with English subtitles is also being planned.

The motion poster release last week depicts drawings of war scenes and explosions. Interestingly, one such scene depicts gunmen attacking a bus. Tamil Nadu media has taken it as a depiction of the infamous LTTE shootout of a bus carrying Lankan soldiers that sparked the 1983 anti-Tamil riots. It also shows Murali bowling in the backdrop of all this violence and also being no-balled for his suspect action and later disproving the same.

M.S. Sripathy, Director of 800 produced by Dar Motion Pictures, has explained that Sethupathi would not act in any film that would hurt any section of society. “When the film is released, all these misgivings would disappear,” he said.

Murali, who is married to the daughter of two Tamil doctors from Chennai, is presently the Bowling Coach of the Indian Premier League (IPL) team Sunrisers Hyderabad. The team is owned by Kalanithi Maran, who also owns Sun TV. Maran is the cousin of Dravida Munnetra Kazhagam (DMA) President M.K. Stalin and elder brother of DMK MP Dayanidhi Maran.