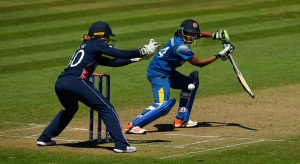 * Considered the best women’s cricketer to ever play for SL

* Won a Bronze Medal at Asian Games in 2014 at Incheon 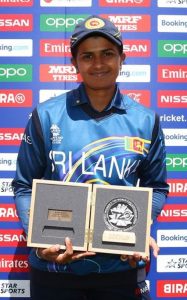 “She’s the big sister on my team. Actually, she’s a legend. She is the number-one all-rounder in our team and in the world. She helped me, our youngsters, and our seniors a lot. We call her the legend and today she retired as a champion.”

Shashikala Siriwardene is just an ordinary Colombo lass before she took to leather-ball cricket seriously as a teenager. That was at the dawn of this millennium. A new generation of fans were embracing the game then, after the islanders had won the 1996 World Cup. Since then, Shashikala’s cricket evolved in parallel to virtually the evolution of women’s cricket in Sri Lanka.

Despite not being able to help raise the standards of Lankan women’s cricket to an acceptable level in the world, she managed to become the face Sri Lanka’s game in world stage through almost two decades. And, most significantly, through those years Siriwardene managed to carve a nice niche for ladies’ cricket in a painfully conservative and traditional cultural context in a country like Sri Lanka. How successful she has been in that effort is something we’ll be able to judge only in future.

We at ‘The Sunday Morning Sports’ focused sometime ago that how Sri Lanka’s women’s cricket has been badly affected by some undesirable social practices of some of its stakeholders. The sport has become a leeway to fulfil sexual desires of some persons who may not be able to do so, so easily in another social context. We tried to bring in to focus this issue in an article series titled ‘Lesbianism and Sports’.

Some agreed with our point while major LGTB movements based in Colombo expressed their dissatisfaction over our line of argument. It was not essentially on anyone’s sexual orientation but on how a certain sporting structure has been caught up in a quagmire due to most of its participants’ sexual inclination.

We had a point there because some came into the open, after those articles, and revealed us there was no space for heterosexuals in Sri Lanka’s women’s cricket. Some leading male players told us they were never going to introduce their daughters to cricket fearing this unhealthy trend. Not ‘lesbianism’ but ‘how it was arbitrarily thrust upon the others’ was the problem in Sri Lanka’s women’s cricket setup, one could assume.

Here comes the significance of Shashikala. Her perseverance in international stage, through various injury troubles, defined perhaps for the first time a truly feminine role-model in our women’s game.

It was something hard to come by: Not another man-like cricketer, but a truly woman batter or a bowler to inspire the forthcoming generation of ‘girls’ to embrace cricket, as if they do it in either tennis, basketball, or swimming.

In years and years to come Shashikala Siriwardene will therefore be remembered for giving Sri Lanka’s women’s cricket a much needed identity in its most difficult formative period.

We wish her all the best for her all future endeavours!

Mali, the dream is being shattered

January 27, 2020 byRevatha No Comments
The jam-packed Pallekele told us a story. Despite continuous defeat, the local fans follow the game of cricket very closely

October 6, 2020 byRevatha No Comments
The Interception by Malinda Seneviratne