Much of the talk before this series was about how much aggression would be shown. India’s top order provided plenty in the first session and it cost them dearly. Australia took advantage of some reckless strokeplay to have them four down shortly after drinks before Cheteshwar Pujara showed the value of patience in waiting for the ball to soften and bowlers to tire, on a day where it touched 40 degrees in the middle. Pujara was rewarded with a magnificent 16th Test hundred. 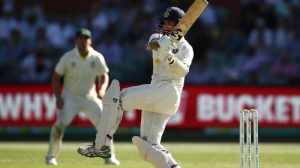 Pujara’s 246-ball innings was comfortably his longest in Australia, surpassing the 135 deliveries he faced at the same ground in 2014

Pujara’s 246-ball innings was comfortably his longest in Australia, surpassing the 135 deliveries he faced at the same ground in 2014, and without him India would have been sunk. He moved into the 90s with a top-edged hook for six, India’s sixth six of the day, the ball after replays suggested he got a nick on an attempted cut but Australia did not review.

A rasping pull for four took him to 99 then Mohammed Shami was able to give him the strike and he clipped Mitchell Starc wide of mid-on to reach three figures. Pujara’s net sessions may not make viral social media videos, but the value of an old-school innings was there for all to see. He could not quite make it to stumps, though, as a brilliant direct hit from Pat Cummins found him short with what became the last ball of the day.

Thanks to Pujara’s masterclass of playing pace and the threatening spin of Nathan Lyon, India’s end-of-day position of 9 for 250 was better than appeared likely after the early carelessness. However, being 4 for 41 left them with a mountain to climb that could still be too great to scale. The Pujara-led recovery was aided in parts by Rohit Sharma – although he fell to the worst shot of the lot – the aggressive Rishabh Pant and the sensible R Ashwin.

Lyon ensured Australia made inroads during the middle of the day, Cummins struck shortly before the new ball was due and Mitchell Starc broke through with it but Pujara’s defiance meant they would have to come back to finish off the innings on the second day.

Tim Paine did well not give away his feelings when the coin fell in Virat Kohli’s favour on a day that appeared tailor-made for batting. But he did say that there could be some assistance early on and, although he probably did not factor in the charity of India’s shot selection, his bowlers did not let him down. With the last ball of his first over, Josh Hazlewood lured KL Rahul into driving away from his body and Aaron Finch snapped up a sharp chance at third slip. It set the tone in every way.

M Vijay was set up by a series of short deliveries from Starc, edging a drive the ball after awkwardly fending a bouncer wide of gully. That put India’s openers back in the dressing room inside seven overs and brought Kohli, the man of so much attention, to face a still-fresh new-ball attack.

Kohli was more certain in defence than the top three as Australia’s quicks regularly made him play but even greatness makes mistakes and facing his 16th delivery, from Cummins, he chased a full, wide delivery which took a thick edge. On another day he would have got away it, a boundary flying to third man, but on this occasion it was intercepted by a stunning grab from Usman Khawaja, diving full length to his left almost horizontal on the ground. The expression on all faces told the story.

Ajinkya Rahane, who had deposited Lyon over long-on, joined in the wild driving to give Hazlewood his second of the morning as India limped to lunch. Rohit dominated the fifth-wicket stand of 45 with an innings that included three sixes, one a magnificent lofted drive off Cummins, while Pujara went scoreless for a period of 29 deliveries on 11. What followed was an extraordinary display from Rohit: he got away with almost being caught on the deep-midwicket rope by Marcus Harris only to then slog the next ball high into the air to offer a much simpler chance. More fuel to the fire that is the debate of Rohit the Test cricketer.

Pant also played with aggression although he was the first batsman who did not have to admonish himself on dismissal when a delivery from Lyon gripped just enough to take the edge.

When Pant fell, Pujara was on just 35 and Australia would have had visions of wrapping up the innings for under 200. Pujara’s fifty came from 153 deliveries and Ashwin helped him add 62 for seventh wicket in the longest stand of the innings. When Ashwin was squared up to be taken at slip and Ishant Sharma cleaned up by a full delivery, it appeared Pujara could run out of partners. Yet, as the shadows lengthened, he fashioned a priceless 40-run stand with Mohammed Shami. It was still Australia’s day, but one man ensured India made it a contest.