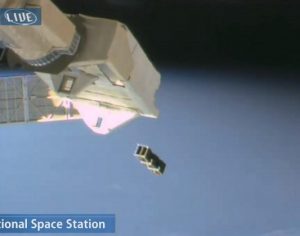 Raavana 1 was launched into space from NASA’s Wallops Flight Facility on Virginia’s East Shore in April.

The BIRDS-3 satellites from Japan, Nepal and Sri Lanka were taken to the International space station (ISS) and boarded onto the Antares rocket and launched in April.

The release of the satellite from the ISS was broadcasted live on YouTube and officials from the Sri Lankan embassy in Japan were present at Japan Aerospace Exploration Agency (JAXA) to witness the launch.

Its camera mission is to take pictures of Sri Lanka and its neighbouring countries. Its Lora Demonstration Mission is to validate the module to be used to data download next satellites. The Attitude Determination and Control Mission of ‘Raavana 1’ involves the team trying to reduce the angular velocity of the satellite using magnetic torquers.

September 24, 2019 byTSM Web Desk No Comments
The Department of Meteorology says that the prevailing showery condition over the Island is expected to continue until tomorrow (25) night.

November 7, 2018 byThe Sunday Morning No Comments
The Janatha Vimukthi Peramuna (JVP) is to hold several rallies in key towns island wide against the undemocratic and unconstitutional actions unfolding in the country at present.