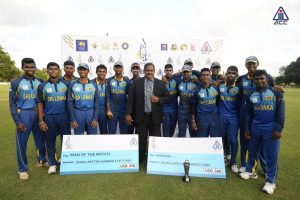 Sri Lanka’s semi-final fixture against India in the Under-19 Youth Asia Cup cricket, that was scheduled to be staged at P. Sara Oval on Thursday, 12 September, was abandoned without a ball being bowled due to torrential rains. The abandonment caused India reach the tournament final automatically as there is no reserve day fixed for the semi-finals.

The other semi-final, between Bangladesh and Afghanistan, which was to be held at Moratuwa also on Thursday, was also washed off causing the resurgent Afghan youths going out of the finals on a disappointing note.

India led Group ‘A’ and met Group ‘B’ second-place holders Sri Lanka in the semis while Group ‘B’ table leaders Bangladesh met Group ‘A’ second place Afghanistan, who stunned favourites Pakistanis in the preliminary round to reach the semis.

The tournament final will be held on Saturday, 14 September at R. Premadasa Stadium starting at 10 a.m.

The eight-team tournament which began on 5 September also included teams from Kuwait (in Group ‘A’), Nepal, and UAE (in Group ‘B’).

May 29, 2019 byRandev No Comments
Australia’s disciplined bowling performance restricted Sri Lanka to 239-8, but they looked to have suffered a blow when Khawaja limped off after being hit on the knee while fielding.

March 11, 2020 byRevatha No Comments
SLC Board President’s XI squad has been named for the second tour match, a four-day official encounter, against touring England, to be held from 12-15 March at P. Sara Oval in Colombo