Rajitha remanded until 27 May 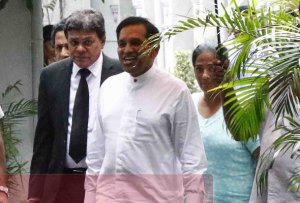 Former Minister Rajitha Senaratna has been remanded until the 27th of May by the Colombo Chief Magistrate.

Senaratna who surrendered to the CID  this evening, was arrested and produced before Court.

Following the ruling, the Colombo Chief Magistrate ordered the CID to produce Senaratna before Court today.

In December last year, the former Health Minister was arrested and remanded over ‘white van’ media briefing held in November.

On 30 December, Colombo Magistrate’s Court ordered the release of Senaratne.

However, the Attorney General filed a revision application on January 08 challenging the decision of the Magistrate’s Court to grant bail to Senaratne.

OMP report to be submitted to cabinet for approval

September 9, 2018 byThe Sunday Morning No Comments
The interim report by the Office on Missing Persons (OMP) will be submitted to Cabinet for approval.