Rajitha to be sent to Pallansena Isolation Centre Negombo 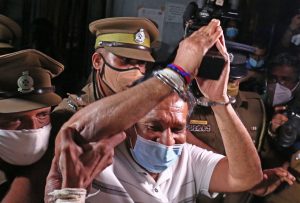 Former Minister Dr. Rajitha Senaratne who was remanded until 27 May by the Colombo Chief Magistrate is to be sent to the Pallansena Isolation Centre in Negombo, the Commissioner General of Prisons said.

Senaratna who surrendered to the CID  this evening, was arrested and produced before Court.

Following the ruling, the Colombo Chief Magistrate ordered the CID to produce Senaratna before Court today.

In December last year, the former Health Minister was arrested and remanded over ‘white van’ media briefing held in November.

On 30 December, Colombo Magistrate’s Court ordered the release of Senaratne.

However, the Attorney General filed a revision application on January 08 challenging the decision of the Magistrate’s Court to grant bail to Senaratne.

May 5, 2020 byTSM Web Desk No Comments
A total of 138 persons have been directed to quarantine centres from multiple locations, Commander of the Sri Lanka Army Lieutenant General Shavendra Silva said.