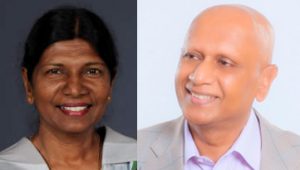 Former Deputy Governor of the Central Bank of Sri Lanka Dr. Ranee Jayamaha and Nature’s Beauty Creations Ltd. and Multichemi International Ltd. Chairman Samantha Kumarasinghe were officially confirmed as the newest members of the Monetary Board of the Central Bank today (24th).

The Constitutional Council (CC), which met this evening at its Chairman and former Speaker Karu Jayasuriya’s Residence, approved the nominations of President Gotabhaya Rajapaksa for the two vacancies of the Board, which is responsible for monetary policy decision-making.

Jayamaha is a former chairperson of Hatton National Bank Plc. and is currently an Advisor to the President on Banking. Kumarasinghe is primarily known as a businessman and exporter, and was only appointed to the Monetary Policy Consultative Committee (MPCC) of the Central Bank, which the Monetary Board consults, early this year. He will now vacate his position in the MPCC to sit in the Monetary Board.

Jayamaha and Kumarasinghe replace former Colombo Stock Exchange (CSE) Chairman and veteran banker Nihal Fonseka and Institute of Policy Studies (IPS) Executive Director Dr. Dushni Weerakoon, who submitted their resignation from the Monetary Board on 31 May.

The Monetary Board consists of 5 members, and currently includes the Governor of the Central Bank Prof. W. D. Lakshman, the Secretary to the Ministry of Finance (ex-officio) S. R. Attygalle and Sanjeewa Jayawardena PC, who was appointed in February this year, in addition to the latest appointees. The three non-executive board members are nominated by the President before they are submitted for Constitutional Council approval and each appointment is for a six-year term.

The quorum for Monetary Board meetings is three members but in cases where a unanimous decision is required, the concurrence of all five members is necessary. Therefore, these appointments provide stability to the Board.

Nihal Fonseka was appointed in July 2016 and resigned before the completion of four years, while Dr. Dushni Weerakoon was appointed as recently as July 2019 and resigned within her first year. The resignations proved to be controversial as they were asked to resign to make way for two new members who would align with the vision of the Government and the Central Bank.

Fonseka confirmed this to The Sunday Morning Business at the time.

February 18, 2019 byCharindra No Comments
The retail arm of Softlogic Holdings PLC, which includes ODEL, Cotton Collection, Glomark and a consumer electronics business, has been hit by depreciation and import restrictions in 3Q of 2018/19 FY.