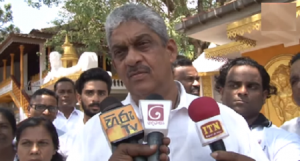 “According to sources Wickremesinghe has said he will not contest the forthcoming parliamentary elections and will come through the national list.”

Asked which party Wickremesinghe will contest under if he decides otherwise, Fonseka said all UNPers will be contesting under the new UNP-led alliance unless and otherwise a member wants to contest independently.

“Nominations will be given through the Samagi Jana Balavegaya.  Wickremesinghe has the right to contest independently as well.”

Fonseka said Wickremesinghe was expected to attend the official launch of the Samagi Jana Balavegaya as the Leader of the UNP.

The launch will take place at the Nelum Pokuna Mahinda Rajapaksa Theatre next Monday(2).

September 18, 2018 byEaswaran No Comments
Five elephants have been killed in a train accident along the Battiacloa railway track in Habarana.