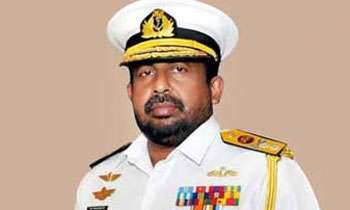 Chief of Defence Staff (CDS) Ravindra Wijegunaratne was summoned before the Criminal Investigations Department (CID) today to be questioned over the abduction of 11 youth.

However Wijegunaratne failed to appear before the CID today as he was in Mexico.

Wijegunaratne was in Mexico to attend the the Independence Day celebrations on behalf of Sri Lanka.

The Chief of Defence Staff had been given notice last week to appear before the CID today.

However CID sources said that they were not aware till today that he had left the country.

The Colombo Fort Magistrate had recently ordered the CID to investigate claims that Wijegunaratne had aided and abetted a Navy Officer, Chandana Prasad Hettiarachchi alias Navy Sampath, to evade court where the magisterial inquiry into the disappearance of 11 youths was underway.

November 16, 2018 byEaswaran No Comments
Several Policemen and some Parliamentarians were injured during the chaos in Parliament today.

Ranil to take oaths on Sunday?