Ravi under fire for false information 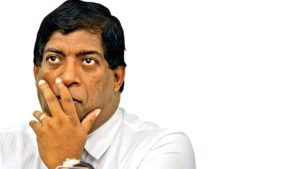 Minister Ravi Karunanayake is to be charged or allegedly providing false information to the Presidential Commission of Inquiry which was appointed to investigate the Central Bank treasury bond scam.

The Attorney General’s Department has informed the Colombo Magistrate’s Court that they have reason to believe that the information provided by Minister Karunanayake to the Bond Commission were false.

The charges were taken up before the Colombo Chief Magistrate, Lanka Jayaratne on Thursday (30), and presently the Criminal Investigations Department (CID) is carrying out investigations pertaining to this complaint.

Senior State Counsel Lakmini Girihagama, appearing on behalf of the Attorney General (AG), informed the court that the department intends to file charges against Minister Ravi Karunanayake for giving false evidence after the investigations related to the incident are concluded.

Further hearing of the case has been postponed by the Chief Magistrate till July 29.

The Chief Magistrate further instructed the CID to carry on with their investigations in to report the relevant progress on the investigation to the Court on that day.

April 10, 2020 byTSM Web Desk No Comments
Minister of Foreign Relations, Skills Development, Employment and Labour Relations, Dinesh Gunawardena met with the Secretaries and senior officials of the Ministry and the Sri Lanka Bureau of Foreign

CBSL to crack the whip

July 12, 2020 byTSM Web Desk No Comments
The Central Bank of Sri Lanka (CBSL) has appointed a three-member committee to examine and report on the irregularities and illegal activities of the finance and finance leasing businesses, and to mak