December 18, 2018 by themorninglk No Comments 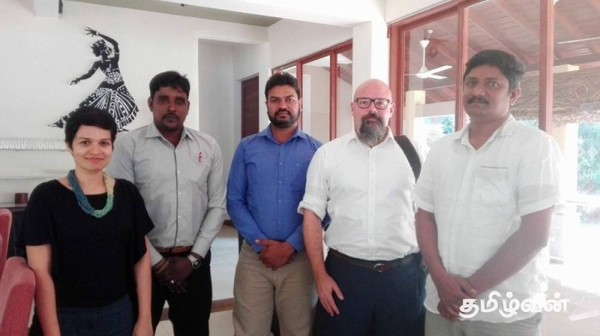 A group of former LTTE cadres who had given up the armed struggle and entered the democratic process are appealing to the public, to put the past behind and look to the future.
The Crusaders for Democracy (CFD) contested the last local government (LG) elections with the Tamil National Alliance (TNA) and secured seats in two LG bodies in the North.
Now, the CFD are looking to ride on the initial success and contest the next provincial council and parliamentary elections.

Ganeshalingam Chandralingam alias Thulasi was an armed LTTE cadre during the war, but gave up arms after the LTTE lost the war in 2009.

He underwent rehabilitation and was released into society and later entered politics.
Speaking to The Sunday Morning, Thulasi said that the LTTE was engaged in an armed struggle to secure the legitimate rights of the Tamils.

“We were basically forced to give up our armed struggle in 2009. We are now fighting for the rights of the Tamils through democratic means. The Government seemed to give voice to the guns rather than voice to negotiations. But anyway, let’s forget the past,” he said.

Thulasi said that now over 40 former LTTE cadres were involved in politics.

Several diplomats extended support to the efforts of the former LTTE cadres to enter the democratic stream to secure the rights of the Tamils in the North and East.

Diplomats from the US, UK, EU, and Canada had talks with the CFD in recent times.
Just last week, diplomats from the UK High Commission in Colombo met Thulasi and other rehabilitated LTTE cadres and discussed several matters.

The EU continues to consider the LTTE as a terrorist organisation and the EU’s restrictive measures against the LTTE remain in force.

“The diplomatic community keeps encouraging us to remain engaged to address the issues faced by Tamils through diplomatic means. They do not want us to return to war,” he said.

The recent shooting and killing of two policemen in Batticaloa has been blamed on two former LTTE cadres, although the Police have not said so officially.

“It has now come to a situation where even if someone sneezes the LTTE is blamed,” Thulasi said.
He said that they, as former LTTE members, strongly condemn the shooting and urged the authorities to properly investigate the incident and ensure justice is served.

Another issue which is blocking the political path of the rehabilitated LTTE cadres is an attempt by some groups based overseas to push for a separate “Eelam” state.

Most recently, a new organisation operating mainly from Switzerland using the name the Liberation Tigers of Tamil Eelam (LTTE) emerged.

The newly-formed LTTE promotes itself as a political group shunning violence while pushing for Tamil concerns to be addressed.

But Thulasi insisted that the real LTTE is not based in Switzerland, Canada, UK, or any other country.
He said the real LTTE was still in Sri Lanka and it was they who had a right to say what path they must take.

“We never left Sri Lanka. We continue to remain in Sri Lanka and are fighting for the rights of our people,” he said.

Thulasi said that several new groups keep forming like some Tamil political parties, but they are merely like firecrackers which come out with a bang but soon go silent.

He also said that what was important was to work together to address one goal and with that in mind the CFD would continue to work with the TNA.

Some former LTTE members living overseas and based in the North have, in recent times, rejected the TNA on the basis that the TNA was not pushing for the same demands the LTTE pushed for during the war.

However, Thulasi said that the TNA was picked by the LTTE as the political representatives for the Tamils and so the CFD would work with them.

He also noted that there were only a few political parties recognised in the South even though over 70% of the population in the country was Sinhalese. In the North and East however, there were over 100 political parties representing them when only around 20% of the population is Tamil.
Thulasi said that they also had the support of the Tamil Diaspora to push for the rights of Tamils through democratic means.

TNA Parliamentarian S. Shritharan told The Sunday Morning that former LTTE cadres made a big sacrifice during the war at a time when they should have been studying or working.
“They have a key role to play in Tamil politics. They had a goal to achieve at one time, now they have a goal in politics and they should be allowed to be a part of the democratic stream,” he said.
Meanwhile, Shritharan also noted that there are various groups, including former LTTE cadres based overseas, fighting for the Tamil cause.

He said that while the stand they took on the issue may differ, he was not prepared to be critical of anyone as they had played a key role in the past in the Tamil struggle.

October 27, 2019 byThe Sunday Morning No Comments
Concerns have now been raised over the uncontrolled, illegal hotel constructions mushrooming in Ella – the most popular tourist destination this year – with more than 700 hotels yet to be registered