Two global religious world leaders were in Sri Lanka last week carrying a message of hope as the country recovers from the deadly Easter Sunday attacks which killed over 250 people.

The heads of a Christian and a Muslim community arrived in Sri Lanka at an ideal time, as an attempt to reconcile the two communities following the attacks is needed now more than ever.

Primate of the Anglican community Archbishop of Canterbury Justin Welby and Head of the Dawoodi Bohra community Dr. Syedna Mufaddal Saifuddin TUS were in Sri Lanka last week and were accorded state visits.

Dr. Syedna Mufaddal Saifuddin TUS arrived in Sri Lanka to conduct the Ashara Mubaraka sermons in the city. He visited the Burhani Park after arriving in Sri Lanka where thousands of Dawoodi Bohras accorded him a warm welcome. 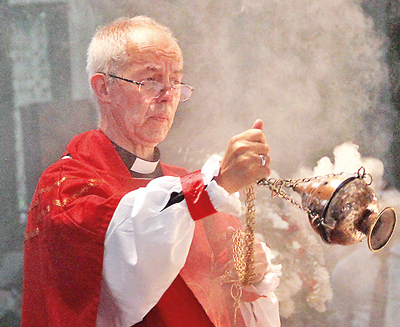 He counselled community members to always remain loyal to their homeland and prayed for peace, harmony, and prosperity in Sri Lanka.

During his stay in the city, Dr. Syedna Saifuddin will also interact with local community members and look into their affairs. Senior government officials of the country and leaders of other faiths are expected to meet with Dr. Syedna Saifuddin and discuss topics pertaining to the betterment of the city and society at large, organisers said.

Ashara Mubaraka refers to a period of 10 days at the beginning of the Islamic year dedicated to the remembrance of Prophet Muhammad (SAWS) and his Ahle Bayt (AS), (family and kin), specifically his grandson Imam Hussain (AS). The 10th day of Muharram, the first month of the Islamic calendar, is known as Ashura and marks the day on which Imam Hussain was martyred along with his family members and companions. This year, the event will run through 31 August to 9 September in Sri Lanka.

The commemoration of Imam Husain’s martyrdom is an important element of the Dawoodi Bohra faith. During Ashara Mubaraka, Dr. Syedna Saifuddin will conduct a series of sermons over the nine days that explore themes of justice, sacrifice, brotherhood, forgiveness, kindness, and piety; qualities that manifest themselves in the tragedy that befell Imam Hussain and his loved ones in Karbala, Iraq.

Colombo is home to a Dawoodi Bohra community numbering around 2,500 members. The Bohras in Sri Lanka, like the community at large, are mostly businessmen and traders. Of the four Bohra Masjids in Sri Lanka, Husaini Masjid in Colombo is the largest and will be the centre for this year’s Ashara Mubaraka sermons.

The Archbishop of Canterbury arrived in Sri Lanka for a few days and took time to meet the families of the Catholic Church affected by the Easter attacks.

He also met leaders of various religions in Colombo, including members of the Dawoodi Bohra community, and spoke on the need to maintain unity.

At the meeting, he noted the challenges faced by religious communities in recent times, mainly because of the spread of extremism, including in Christianity.

He called on religious leaders to reject extremism and teach peaceful dialogue.

Speaking at a special service held at the Cathedral of Christ the Living Saviour, Colombo on Thursday night, Archbishop Welby recalled the shock on hearing the news of the Easter Sunday attacks.

Archbishop Welby further noted the need to ensure peace and reconciliation continues in Sri Lanka, a country which suffered from the war and now from the Easter attacks.

A case of no action, talk only?

October 21, 2018 bythemorninglk No Comments
A key decision is expected to be reached this week on the steps to be taken to address the political prisoner issue, a decision which may also be a deciding factor on the 2019 Budget.