Report on elephant deaths this week 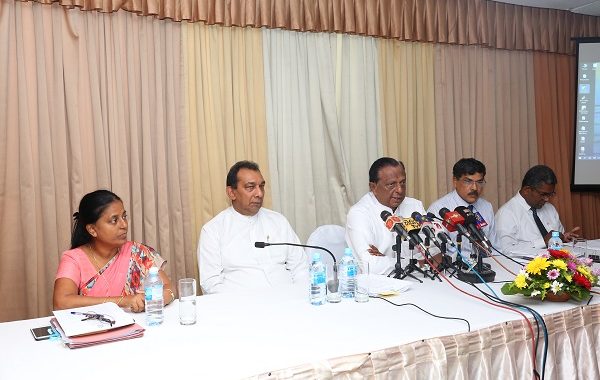 Minister of Tourism Development, Wildlife and Christian Religious Affairs John Amaratunga said the final report on the suspicious deaths of the  7 elephants in Habarana will be issued by the end of this week.

According to Amaratunga the preliminary investigations have been completed, however no conclusion has been reached so far on the cause of the death of the seven elephants.

Amaratunga was speaking at a press conference held in Colombo today.

Department of Wildlife Conservation Director General  Mr. M.G.C. Sooriyabandara said a 3 member  committee was formed to investigate the suspicious deaths of the elephants  and the full report will be released by the end this week.

However Sooriyabandara said according to results of the preliminary investigations, there is fair suspicion that the animals died of chemical poisoning. The committee suspects the chemical could be an Agricultural chemical, Alge or bacteria of some type or a chemical from industrial waste.

“Whether the elephants have been poisoned deliberately will be known only after the said institutes submit their reports”Amaratunga  said.

On Friday (27), four elephants were found dead in the forest reserve near Digampathana and by Saturday (28), another three carcasses were found within a radius of 4 km from the previous incident in Hiriwadunna. Out of the seven elephants , 6 were female and 1 was a male elephant. A team comprising wildlife rangers, veterinary officers, and army personnel were deployed to carry out further investigations in the area.

Meanwhile Amaratunga  said a joint cabinet memorandum was presented by the Prime Minister’s office and the Ministry of tourism development at the cabinet meeting held this morning on regulation and transferring of the possession of 47 tamed elephants under ongoing judicial proceeding and investigations.

A special land will be identified for these elephants to be located.

March 1, 2019 byThe Sunday Morning No Comments
The International Monetary Fund (IMF) said that it has reached a Staff-Level Agreement with Sri Lanka on the Fifth Review of Sri Lanka’s Extended Fund Facility.