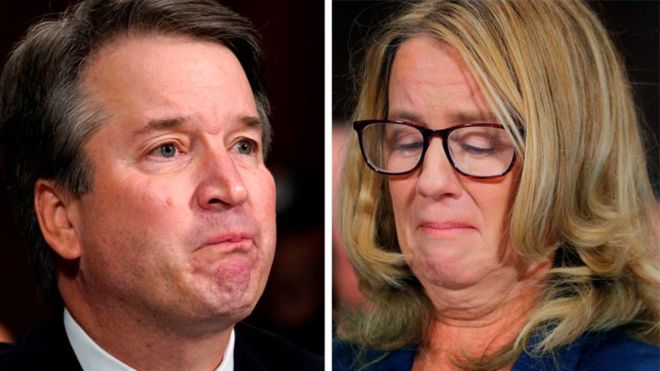 Republicans are pushing to vote on President Donald Trump’s nominee for the US Supreme Court on Friday, after hearing dramatic testimony from him and a woman accusing him of sexual assault.

Brett Kavanaugh emphatically denied all allegations against him and vowed he would never give up.

Earlier, Christine Blasey Ford said an assault by Kavanaugh 36 years ago had “drastically” affected her life.

Trump said Kavanaugh was “honest” and called for a Senate vote.

The president accused Democratic senators of a “search and destroy strategy”, while Kavanaugh accused them of destroying his family and good name for political reasons.

Thursday’s hearing, which lasted for nine hours, brought an outpouring of support for  Ford from the #MeToo movement against sexual harassment and assault.

The Senate Judiciary Committee is set to go ahead with a previously scheduled vote on Friday, though there is doubt whether Republicans have the votes in the full Senate to see the conservative nominee confirmed into the US’s highest court. The full Senate vote would not take place before the middle of next week.

The Supreme Court plays a vital role in US political life – appointed for life, its nine members have the final say on US law.

This includes highly contentious social issues, such as abortion, and challenges to government policy.

What did Christine Blasey Ford say?

Prior to Thursday, no-one had heard from 51-year-old Dr Ford publicly since the allegations arose.

After addresses by the leading Republican and Democrat senators, Dr Ford delivered her statement, at times close to tears.

“I am here today not because I want to be,” she said. “I am terrified. I am here because I believe it is my civic duty to tell you what happened to me while Brett Kavanaugh and I were in high school.”

She alleged Kavanaugh and his friend Mark Judge had locked her in a bedroom during a small gathering at a house in a Washington DC suburb in the summer of 1982, when she was 15 and Kavanaugh was 17.

She said Kavanaugh had tried to remove her clothing, pinned her to a bed and groped her. Both men were “drunkenly laughing”, she said.

She added: “Brett’s assault on me drastically altered my life. For a very long time, I was too afraid and ashamed to tell anyone the details.”

Under questioning by a Democratic senator, she said her most vivid memory was “the laughter between the two and their having fun at my expense… they were laughing with each other – two friends having a really good time with one another”.

In an answer to another Democratic senator’s question about claims of mistaken identity, Dr Ford said she was “100%” certain it was Kavanaugh who had assaulted her.

Many of the 10 Democrats in the 21-person committee paid tribute to Dr Ford’s bravery in coming forward – and supported her call for an FBI investigation into her allegations.

The 11 Republicans, all men, deferred most of their questions to a lawyer, Phoenix prosecutor Rachel Mitchell.

How did Brett Kavanaugh respond?

“This confirmation process has become a national disgrace,” he told the committee.

“The constitution gives the Senate an important role in the confirmation process, but you have replaced advice and consent with search and destroy.

“Since my nomination in July there has been a frenzy on the left to come up with something, anything to block my confirmation.”

He insisted he would not be “intimidated” into withdrawing from the process.

“You may defeat me in the final vote but you’ll never get me to quit. Never.”

Kavanaugh said he did not doubt that Dr Ford had been assaulted, but insisted: “I’ve never sexually assaulted Dr Ford – or anyone.”

He admitted he had drunk beer while at high school and under-age, but said he had never got so drunk as to forget events.

He added that his calendars for 1982 – which he had kept – showed he had not attended a party at the location Dr Ford had described.

Under hostile questioning from Democratic senators, he repeatedly insisted he was innocent and said an FBI investigation – suggested by Dr Ford to establish the truth – would be useless as it would not reach conclusions.

What has been the reaction?

The Democratic senators on the committee have called on President Trump to “immediately withdraw” Kavanaugh’s nomination.

Moments after the hearing ended, however, President Trump stood by his nominee and said he found Kavanaugh’s testimony “powerful, honest and riveting”.

Trump has repeatedly defended the judge’s character, saying he is “one of the highest quality people” he has ever met.

Thousands of protesters against Kavanaugh’s nomination took to the streets on Thursday and 59 people arrested near the Supreme Court in Washington, DC.

Are there other allegations against Kavanaugh?

Yes, and new ones appeared as the hearing loomed. At present they are:

Why does this all matter and what happens next?

The Senate Judiciary Committee must vote on Kavanaugh’s confirmation before it goes to the full Senate for a vote there. This is expected to happen on Friday.

Then the nomination will go to the full Senate, which will debate and vote on it. This might happen in the middle of next week.

Republicans want their nominee in place before mid-term elections next month, when they could lose their 51-49 control of the Senate.

Any confirmation of Judge Kavanaugh could also affect female voters in November. The confirmation of Supreme Court Justice Clarence Thomas in 1991, despite allegations of sexual harassment, fuelled the rise of a new generation of female politicians in elections the following year. (BBC)

January 28, 2020 byTSM Web Desk No Comments
The UK government has decided to allow Huawei to continue to be in its 5G networks but with restrictions.

June 29, 2020 byTSM Web Desk No Comments
Gunmen have attacked the Pakistani stock exchange in the southern city of Karachi, killing at least two people and injuring others, local media report.