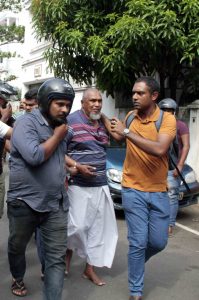 Yusuf Mohamed Ibrahim, who is the father of two of the suicide bombers of the Easter Sunday attacks and currently in police custody, had established his spice export business in 1982.

He also won local and international accolades for his business excellence. In recognition of his contribution, the Sri Lanka Export Development Board had awarded him the Presidential Export Excellence Award in 2016.

Ishana Exports (Pvt.) Ltd. was recognised as the highest foreign exchange earner in 2014 and 2015.

Ibrahim’s two sons, Inshaf Ahmed and Ilham Ahmed, were involved in the Cinnamon Grand Colombo and Shangri-La Hotel, Colombo bombings. Inshaf had in fact been the CEO of Ishana Exports and accepted the award on behalf of his father.

Furthermore, the family established the manufacturing plant under Colossus (Pvt.) Ltd. for non-ferrous metal products such as pipes, profiles, and different types of sections out of copper, brass, and other copper alloys in 2012. The products were exported to the Middle East and countries of the European Union. This company too was headed by Inshaf Ahmed.

The Sunday Morning, during a site visit, learnt that the workers were from India, Bangladesh, Nepal, and Pakistan working in both the metal factory and the storage facility for Ishana Exports. On Monday, the Police had visited the factories and arrested the Sri Lankans working in the metal factory. The foreign nationals were later removed from the site by the respective embassies.

Scrap metal was piled up for crushing and smelting at the ground floor; copper pipes were stockpiled in another corner. We made our way to the upper floor and came across copper cables that had been packed and labelled with the date on it reading 21 April 2019 and the time stamp at 11:23.

The final entry had been made on 20 April in the petty cash log book and had no further entries on it.

The storage facility for Ishana Exports stands right opposite the Colossus in Wellampitiya, and both factories had staff quarters for foreign workers.

Ishana Exports (Pvt.) Ltd. shares the storage plot with The Beans Company, which is headed by another son of Y.M. Ibrahim, and BG Marketing (Pvt.) Ltd., which imports kitchenware. The factories were in operation for approximately 10 years, the neighbouring factory workers informed. They had also observed a consignment of empty shells and cartridges being unloaded at the yard about a month ago.

According to the neighbours, the employees of BG Marketing too had stopped visiting the storage facility after the Sunday attacks.

One lorry branded Ishana Exports (Pvt.) Ltd. and three lorries branded BG Marketing (Pvt.) Ltd. were parked in the compound. The storage area was under lock and key, but the main gate was not.

A dire need for solutions

August 12, 2019 bythemorninglk No Comments
The inability of the Norochcholai Coal Power Plant to curtail harmful emissions has once again highlighted the importance of Sri Lanka accelerating its shift into renewable sources such as solar power