Returning garbage containers to UK : No space on ships

Sri Lanka Customs is facing difficulties securing space on ships to reship the waste containers, which are currently held at the Katunayake Free Trade Zone (FTZ), to the UK.

“With the operation in the Colombo Port hampered due to the increasing number of Covid-19 cases that were reported from the port premises, and the restriction in shipping movements the world is facing, we have found it difficult to allocate necessary space to reship the remaining waste containers back to the UK,” Superintendent of Customs Lal Weerakoon told The Sunday Morning on Friday (20). 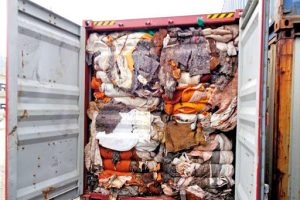 Legal paperwork was completed to proceed, with the court order being issued by the Central Environmental Authority (CEA) in September, and the reshipment of the remaining garbage containers was to commence from October onwards.

It was stated that the UK’s Environmental Agency in July had agreed to accept the controversial waste containers exported to Sri Lanka by a UK company.

The case was taken up on 23 July, during which time the Attorney General’s (AG) Department had informed the Court of Appeal that the UK Government was in the process of conducting an inquiry into the British company that exported waste material in freight containers to Sri Lanka, violating the UK’s environment and health regulations.

In January this year, the CEA proposed alternative options including securing the services of a foreign consultancy firm with adequate technical knowledge to expedite the process of investigating into the containers of imported garbage from the UK which were found at the Colombo Port in 2019.

In 2019, the Customs and the CEA found that some private parties had imported around 240 container loads of waste to the country without the approval of the CEA, breaching the provisions of the Basel Convention.

It was later revealed that the waste consignments were imported from the UK and had been lying at the Colombo International Container Terminals (CICT) and the Katunayake FTZ since 2017.

The Centre for Environmental Justice (CEJ) filed a writ of certiorari and mandamus in the Court of Appeal, naming the CEA, Customs, and the AG’s Department as respondents of the case, which ordered the CEA and the Customs to conduct an investigation into the illegal importation of container loads of waste at the Colombo Port and Katunayake FTZ.

The court previously instructed the Government Analyst’s Department to submit a report after inspecting the garbage consignments at both the Port of Colombo (111 containers) and the Katunayake FTZ (130 containers).

September 24, 2020 byCharindra No Comments
Sri Lankan authorities announced yesterday (23) that they will offer live video streams from the island nation’s wildlife parks, in order to help revive a tourism industry that has been decimated by t

July 5, 2019 byRandev No Comments
Non-cabinet Media Minister and State Defence Minister Ruwan Wijewardena affirm that Sri Lanka will not sign deals with America to allow them to build bases in the country.