Rice crisis: Just give our farmers their lands

Rice, the main source of carbohydrates for the majority of Sri Lankans, is a sensitive political topic. I am sure we have all been experiencing this in the recent past. Most often, it is a political football where everyone passes the blame to one another without unpacking the economics behind the rice problem.

If you ask any Sri Lankan the question “what is the problem with the rice market?”, there will be a few common answers. “A rice mafia/monopoly or oligopoly by rice millers” is the most popular. The second most common answer is the fact that the intermediaries are earning more, resulting in farmers being at the losing end.

The third most frequent response is the lack of modern technology in paddy fields which decreases our yield. Many economists and politicians support this argument with a popular statistic which states that agriculture contributes only to 8% of our GDP in comparison to 25% of our labour force involved in farming. In my opinion, the aforementioned concerns are just the tip of the iceberg.

Sri Lankans consume approximately 108 kg of rice per annum per person while the global rice consumption average is 54 kg. The conundrum is that in a country where consumption is twice the global average, farmers continue to be relatively poor.

The main question with rice is: Should farmers increase the harvest or if the harvest drops due to external weather conditions, will they earn the same amount? At times when rice harvest is high, the prices plummet due to ample supply. During this period, we can frequently observe farmers protesting as they urge the government to purchase their seed rice for a guaranteed price or for the government to impose a minimum selling price for farmers as well as a minimum buying price for rice millers. Rice millers have two main solutions to this issue: Either they stop buying seed rice as they cannot sell it at a competitive price because their cost is higher, or they still buy it which results in rice prices in the market skyrocketing to Rs. 110-120.

The high price is not only difficult for consumers to afford but is also a price that political parties pay, which dilutes their political capital. As a result, the Government intervened in the market with limited and poor storage capacity and in some cases, rice was stored in airports. After a few weeks and months, the Government sold these rice seeds to large-scale millers for a lower rate than what they initially paid the farmers, incurring a massive loss of taxpayers’ money. Some of the harvest is wasted due to the lack of storage facilities and logistics failure. As a result, farmers lose out on their income and taxpayers’ money is lost.

The second scenario is the reduction in harvests due to harsh weather conditions which decrease supply and subsequently increase prices of seed rice. Since the total quantity of the harvest is low, the money earned by farmers too continues to be low. Regardless of whether there is a large or smaller harvest, the farmer’s earnings remain consistently low. Hence, farmers are not given an incentive to increase their harvest and overall yield. Playing to their advantage, rice millers have created an oligopoly and so decide on prices in line with their modern and expensive storage capacity.

Then comes the question of why technology is out of reach for most farms. The preliminary reason is that most paddy lands are fragmented for small lands, so it is not possible to run a commercial-level operation with superior technology. The more significant reason is that 82% of Sri Lankan land is owned by the government (out of which approximately 30% is covered by forests) and the remaining 18% is available for people’s private usage.

A small proportion of government-owned land has been given to people for cultivation, but their ability to take loans from banks to invest in technologies such as greenhouses is far beyond their reach. Construction on paddy land is illegal, which means there is a lack of space for any transaction or technological investments. 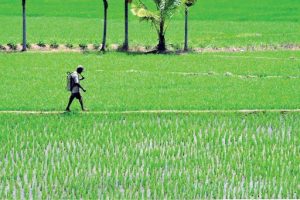 Land issues are a sensitive political issue, but many believe that if farmers are given full ownership of the land, they will sell it to foreigners, which in turn challenges our sovereignty. However, the government ownership of farmlands for nearly a century does not change the destination or quality of life of our farmers. Making things worse, the regulation is such that the paddy lands cannot cultivate anything other than paddy and even if the farmer wants to move for a better high-yield crop, a license needs to be obtained via a cumbersome procedure at government offices.

Given these challenges, how likely is it that anyone would enter paddy farming even if they have a disruptive agricultural idea?

Many Sri Lankans believe that we can easily upscale our farming for rice exports. I sincerely wish we could do that too, but unfortunately this is far from the reality. Sri Lanka cultivates mainly short grain rice in comparison to long grain rice where the world’s demand mainly lies. Even following a good season and excess rice production after domestic consumption, it is not exportable and will further drive the prices down due to excess supply. Furthermore, water is becoming a scarcity due to environmental challenges and currently we do not calculate costs for water consumed in farming.

Recent research has found that 1 kg of rice requires 2,500 (1) litres of water and more than half of that is consumed by the plant itself. If we consider the cost of water to be Rs. 0.20 per litre, the water consumed by the paddy plant itself adds up to about Rs. 280 which is almost three times the current controlled price of 1 kg of rice. The cost of utilising land hasn’t been factored. Fertilisers have been provided with a subsidy and that cost needs to be added to our final cost if we are to create a comparable and competitive costing structure.

The decade-long series of solutions are well known by most of us. For example, rice millers impose price controls on the selling price following raids by the Consumer Affairs Authority (CAA) at the retail level, and the list goes on. That has been the same response by most governments and it is pointless to further elaborate on what has happened. As a solution, we need to have an easier regulatory system and allow the farmers to own their land. The draconian regulations have trapped farmers in a never-ending cycle of poverty for decades.

From the supply and demand end, the only buyers are rice millers. When there is a single buyer in the industry, they inevitably get higher bargaining power. It is important to diversify our buyer category and the only way to do it is to make rice an industrial product. Today, rice is not only used as a source of carbohydrates; alcohol products, rice bran, rice perfumes, rice-based milk, and rice antioxidants are produced at a commercial level, which offer far higher prices to farmers at the buying stage. This is the solution to increase revenue for farmers and help them escape the vicious cycle of poverty.

The day our farmers have access to their own land will be the day the market is open for many categories of buyers, which will be revolutionary for farmers. Until then, we as the consumers need to patiently experience the price controls, higher prices for rice, and the political blame game.

October 13, 2019 byThe Sunday Morning No Comments
The Government and the Central Bank of Sri Lanka (CBSL) have cast serious doubt on the accuracy of Sri Lanka’s economic indicators compiled by the Department of Census and Statistics (DCS).